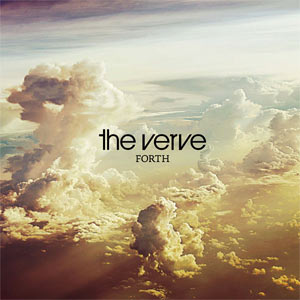 People think I’m an arrogant jerk, but I really do try to be nice. Honestly. My friends go crazy for Coldplay, and I try to focus on Brian Eno’s epic production; buddies want to watch Roger Waters for three hours, and I’m a good sport and hang around. But The Verve has caused perhaps insurmountable rifts between me and my hipster pals. They love The Verve, and I think that other than the inspired sampling on “Bitter Sweet Symphony,” Richard Ashcroft and co are dull as doorknobs, whiny, plodding, a fine example of Britishness covering up lack of ingenuity. Like Sigur Ros, they’re lumped in with a genre populated by good and great bands, but they just don’t measure up. The Verve split in 1999 after Urban Hymns brought them worldwide fame, but recently have come back together for a few live shows. Forth is their first album together in ten years, which leaked onto the intertubes this week.

Unfortunately, the things that bothered me about the band have only become more pronounced over time. While the guitar work often has an attractive, Neil Young-style crunchiness, the songs seem to meander without first establishing a pattern, crossing the line separating “psychedelic” from “pointless jam.” Ashcroft’s vocal chords haven’t aged well, and the innocent clarity that balanced “Bitter Sweet Symphony”‘s pouty lyrics with a plaintive emotional straightforwardness has turned into a guttural mumble. On “Numbness,” a six-plus minute song without a discernible chorus, Ashcroft’s voice is almost laughably gravelly, as he repeats “numbness on the brain,” over and over and over.

I’ve already remarked on the lyrical ridiculousness in evidence on Forth, and things get even lazier, like rhyming “before you have time to slip the chains loose,” with “before you really really really really let loose.” Loose, loose! I’m sorry, only Eminem gets to make rhymes with the same word.

On “I See Houses,” there’s a brief moment of melodic interest, as Ashcroft sings, “I get this feeling that I’ve been here before,” reminiscent of the “I just can’t make it alone” line from Urban Hymns‘ “Space and Time.” But the rest of the chorus just wanders away, and I listened to it four times and still couldn’t remember what he was saying afterwards. Included with the leak is a “bonus track” called “Chic Dub,” and it’s got some interesting reggae-style production, but even there, there’s no song to begin with. Forth is that saddest of things, musicians making music with talent but without soul, spirit, passion, pep, vim, vigor, or, hmm, what’s the word.

Forth is out on August 26 in the US on Megaforce/RED.