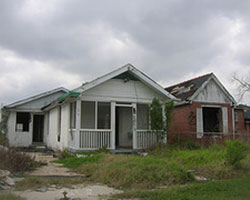 After months of housing-market debris, Congress is still grappling with temporary solutions. One question they should be asking this week: How could these problems have been avoided?

Below, five ways Wall Street and Washington set us up for the crash.

There were myriad calls in the early ’90s to usher in banking controls on the precipice of the GOP “contract with America” revolution. In response, the House battled for the Home Ownership and Equity Protection Act of 1994 to cap the most outrageous predatory loans.

HOEPA’s passage had dire consequences. First, it left a huge gap between the most egregious rates and fees a lender could charge and the next most egregious. If lenders didn’t want to hit the new caps, they could still extend loans with rates and fees just beneath the HOEPA triggers. Since they would make less money off of each loan due to reduced rates and fees, they’d have to find more borrowers to make the same profits.

Florida and the “Rodash Fix”

At the same time the legislative battle to constrain interest rates and loan fees was being waged in Washington, another fight, over loan transparency, was being fought throughout the cities of America. It began in Miami, Florida.

Miami resident Martha Rodash had just received some good news in March 1994; the 11th District Federal Court of Appeals in Florida had awarded her the right to rescind on her mortgage, a major upset for the two big lenders she was facing. Little did she know that her victory would help pave the way for the subprime loan bubble.

Rodash wasn’t some deadbeat trying to get out of her payments. She wasn’t even a victim of predatory lending. But when stricken with multiple sclerosis, she refinanced her home in order to seek a cure. The treatments failed, and she was soon forced to quit her job. Ultimately, she defaulted on her loan.

Charles Baird of Legal Aid came to her defense. He built his case on a fee misstatement in Rodash’s Truth in Lending disclosure sheet. “We didn’t wipe out her debt,” Baird told me about the victory, “but we did void her mortgage interest and take the lien off her house.”

Her consumer victory inspired more than 40 class action suits across the country, and had the national lending industry up in arms.

In 1995, Congress passed a major amendment to the 1968 Truth in Lending Act. That 1995 amendment became known as the “Rodash fix” and had the effect of making certain fees, previously grounds for successful litigation, mute.

Phil Gramm and the “Enron Loophole”

As the late 1990’s stock market boom headed into the new millennium, there were some renewed legislative attempts to rein in the banking industry. Notably, in April 2000, Rep. John LaFalce (D-N.Y.) and Sen. Paul Sarbanes (D-Md.) introduced the Predatory Lending Consumer Protection Act of 2000.

The act would have brought down HOEPA triggers and ensured that everyone in the chain had an interest in homeowners’ ability to repay loans. Sarbanes and Senate staffer Jonathan Miller worked feverishly to line up cosponsors.

The industry attacked the bill and its backers and won. What passed instead was Texas Sen. Phil Gramm‘s Commodity Futures Modernization Act of 2000. The act ushered in tremendous growth of unregulated commodity trades through its “Enron Loophole,” which allowed companies to trade energy and other commodity futures on unregulated exchanges.

Meanwhile, Sarbanes and LaFalce soldiered on for the cause of averting lending disaster through instilling appropriate regulation. Three months later, the duo reintroduced the Predatory Lending Consumer Protection Act of 2001. It died, like its predecessor.

Down but not out, Sarbanes and LaFalce tried to pass the 2002 Act the following May. It failed again.

Two years later, the Office of Federal Housing Enterprise Oversight’s chief economist, Patrick Lawler, said, “There is no evidence here of prices topping out. On the contrary, house price inflation continues to accelerate, as some areas that have experienced relatively slow appreciation are picking up steam.”

Indeed, subprime loan volumes rose from 5 percent of the overall mortgage market in 2001 to 15 percent in 2006. Home equity loans ballooned simultaneously. Then, those adjustable rates kicked in, and yes, prices did top out. Borrower mortgage payments soared by 25 to 30 percent, just as housing values were faltering. Foreclosures ramped up. And consumer protections were simultaneously chucked. On April 15, 2005, Charles Grassley (R-Iowa) passed the 2005 Bankruptcy Abuse and Consumer Protection Act, which worsened the quietly growing housing crisis for consumers. The act took away the ability of borrowers facing bankruptcy to negotiate down the principal of their primary home mortgages with their creditors—meaning they had no way to avoid foreclosure, even if they wanted to.

The finance community’s theory is Darwinian: Little people who take bad risks deserve the consequences. Companies that take bad risks are a welcome addition to the fallen competitor list.

Current congressional packages tend to offer temporary financial solutions to long-term regulatory dilemmas. Yet even if we Band-Aid housing, the gear-up in commodities beats on. Wall Street will continue to battle for fewer restrictions under the political guise of American global competition, while Americans bear the brunt of the consequences.

Research support for this article was provided by the Nation Institute Investigative Fund. For more dates and events related to the lending crisis, click here.