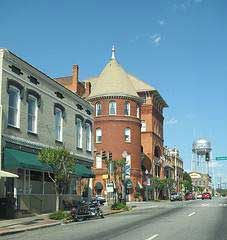 Welcome to Americus, Georgia. Located 10 miles east of the peanut farm where Jimmy Carter was raised, the town has a charming city center with broad streets, a diner that still sells hot dogs for 95 cents, a Confederate flag that flies conspicuously on the outskirts of town, railroad tracks that divide white and black neighborhoods, chain gangs that labor along the roadways, and, on South Lee Street, right across from the courthouse, its very own private probation office. Middle Georgia Community Probation Services is one of 37 companies to whom local governments have outsourced the supervision of misdemeanor and traffic offenders. It’s been billed as a way to save millions of dollars for Georgia and at least nine other states where private probation is used. But to its critics, the system looks more like a way to milk scarce dollars from the poorest of the poor.

Here’s how it works: If you have enough money to pay your fine the day you go to court for, say, a speeding ticket, you can usually avoid probation. But those who can’t scrape up a few hundred dollars—and nearly 28 percent of Americus residents live below the poverty line—must pay their fine, as well as at least $35 in monthly supervision fees to a private company, in weekly or biweekly installments over a period of three months to a year. By the time their term is over, they may have paid more than twice what the judge ordered.

In his courtroom, which doubles as the Americus City Council’s chambers, Judge J. Michael Greene issues a rehearsed warning about these additional charges, though he doesn’t point out that they go to a private company; instead, he compares them to “taxes we all pay at the grocery store.” When I was there in April, he admonished the African American defendants before him, “Don’t fuss at the court clerks. If you do, you are going to jail. They have no more power over it than the nice lady at the checkout counter.”

Carla, a 25-year-old single mother who lives in public housing, has been on probation for more than three years. “I never see myself getting off of it,” she told me. “I could get off of it this year if they let the fines stay what they is and don’t increase them. But every week and every month, they go up.”

Carla’s current case is a traffic violation, issued after she rolled through two stop signs. Judge Greene placed her on probation and ordered her to pay a $200 fine plus Middle Georgia’s supervision fees. In January, she prematurely gave birth to her second child. The staples from her cesarean ripped, and she was placed on bed rest. “I couldn’t even take my baby to the doctor,” she says. Carla called her probation officer every Tuesday trying to report. “After a while I received a letter saying I ain’t reporting or calling or doing nothing I was supposed to do. And she issued a warrant.” One letter she got from Middle Georgia read, “Probation is a priviledge [sic] not a right. Probation did not levy a fine—the courts did.” She was, the letter said, $245 behind. Two months later, thanks to various penalties, that amount had shot up to $525, and her total remaining balance was $690, more than three times the original fine.

By the time I met Carla, her sister had helped her get a minimum-wage job at the local dollar store. But she’d stopped contacting Middle Georgia because she feared going to jail (and losing her kids) if she showed her face. Her friend Erica, who also has a warrant out because of probation fees, told me she worries every time she goes outside. “You be scared to walk to your mailbox, because that’s what the law do—they ride around and try to find you. You’re scared to look for a job. But unless you get a job you can’t pay your fine. So either way, you’re just stuck.”

No one at Middle Georgia returned my calls, so I stopped by the company’s Americus office; there, I watched a female probation officer instruct a toothless man about the additional fees he needed to pay for improperly storing scrap tires at his auto shop. “Y’all know this ain’t right,” he shouted. “You railroading me!” Eventually, another Middle Georgia employee noticed me. I told her I was a reporter. “We don’t talk to reporters,” she said coolly.

Middle Georgia, along with the rest of the state’s private probation industry, owes much of its business to Bobby Whitworth, who was Georgia’s commissioner of corrections until 1993, when a sex-abuse scandal involving female inmates forced him out. Gov. Zell Miller promptly reassigned him to the Board of Pardons and Paroles, which positioned him nicely for a side job consulting with a private probation company called Detention Management Services. Three years later, in December 2003, a jury found Whitworth guilty of public corruption for accepting $75,000 from the company to draft and lobby for legislation that dramatically expanded the role of private probation companies. Whitworth was sent to prison for six months, but the law remains on the books, and the private probation industry—led by Georgia’s two most powerful Republican lobbyists—has lobbied to be given felony cases as well. That plan has run into opposition from law enforcement: One sheriff told lawmakers last year that among his peers, private probation was seen mostly “as a moneymaking fee-collection service.” Another said there is generally “not a lot of emphasis on supervision as much as there is on collection.”

Lawrence Holt, a thin, 24-year-old African American man, is a supervisor at a mattress factory in Americus. He’s held the job for three years, but lives in the projects and, like every member of his family before him, hits the bottle hard. He’s been on probation since November, because of an arrest for driving under the influence a few days after his brother died of diabetes. By April, he had paid his original $600 fine, but had $645 to go to cover Middle Georgia’s fees. He told me he wouldn’t mind paying if his probation officer would only help him get treatment. “I throw up blood,” he said. “I just can’t stop drinking because I got so many problems in my head. I have asked, ‘Can y’all find somebody to help me with my alcohol problem?’ ‘Sir, we can’t do that. We don’t do that.'”

1 in 2 federal prisoners is doing time for drug charges.

“These are not cold, hardened criminals,” local naacp chapter president Matt Wright, a 57-year-old caterer, told me. “These are just people struggling, trying to make it. The probation officers know it’s hard for a poor person to come up with that money. They trick ’em into getting back in the system. They go back before the judge and the judge fines them again, puts them on probation again. And the cycle repeats itself.”