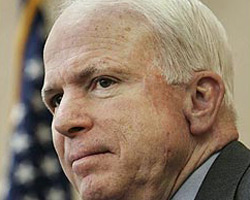 On Monday, during a town hall in Denver, John McCain proposed a radical “fix” for the way Social Security is funded. Responding to a questioner who claimed Social Security “will not be there” when current workers retire (which is wrong), McCain said this:

Americans have got to understand that we are paying present-day retirees with the taxes paid by young workers in America today. And that’s a disgrace. It’s an absolute disgrace, and it’s got to be fixed.

As anyone who knows anything about Social Security understands, “paying present-day retirees with the taxes paid by young workers” is pretty much the functional definition of Social Security. Always has been. That’s what John McCain is calling an “absolute disgrace.”

Update: The McCain campaign has responded to a question about his “disgrace” comment from ABC’s Jake Tapper. We have full coverage here.

Jared Bernstein, the director of the Living Standards program at the Economic Policy Institute, said in an email that he was shocked by McCain’s statement:

That is truly an amazing quote. It’s like he’s saying, “I just found out that taxes come from people…that’s a disgrace.” It betrays a really quite scary lack of knowledge about basic government…. I know he’s not into this kind of stuff, but … it would be hard not to know about the intergenerational financing of Social Security. It’s the biggest government transfer—1/5 of the damn budget. I guess the quote suggests he knows about the financing, but the way he says it, it sounds like he just found out and is shocked.

I can’t imagine how this will play if it goes at all viral. Maybe Social Security is no longer the third rail, but to call it a disgrace ought to be seen as over the top. On the other hand, maybe people will agree with him.

Dean Baker, an economist and the co-director of the Center for Economic and Policy Research, also weighed in by email, writing, “McCain’s position on Social Security is that it is a disgrace. He said so himself.”

Now, before you think, “Wow, that must be a slip of the tongue, he can’t possibly mean that,” please note that McCain said essentially the same thing to John Roberts on CNN this morning. From the transcript:

On the privatization of accounts, which you just mentioned, I would like to respond to that. I want young workers to be able to, if they choose, to take part of their own money which is their taxes and put it in an account which has their name on it. Now, that’s a voluntary thing, it’s for younger people, it would not affect any present-day retirees or the system as necessary. So let’s describe it for what it is. They pay their taxes and right now their taxes are going to pay the retirement of present-day retirees. That’s why it’s broken, that’s why we can fix it. [Emphasis added.]

McCain’s criticism of taxing current workers to pay retirees’ benefits implies support for the Right’s fantasy alternative: private accounts of the type President Bush advocated in 2005. (Bush’s privatization plan failed, in what is now seen as his biggest domestic policy defeat). And McCain’s Bush-echoing attack on Social Security isn’t just radical. It also contradicts his campaign’s stated position. McCain’s website says he supports “supplementing the current Social Security system with personal accounts.” There’s nothing on the website about how the current system is a “disgrace” or how the way it is funded has to be drastically altered. But that’s what McCain was saying in Denver.

This is not the first time that McCain has hinted that he will follow in Bush’s Social-Security-dismantling footsteps. In a Wall Street Journal interview published in March, he made his intentions explicit:

“I’m totally in favor of personal savings accounts,” [McCain] says. When reminded that his Web site says something different, he says he will change the Web site. (As of Sunday night, he hadn’t.) “As part of Social Security reform, I believe that private savings accounts are a part of it—along the lines that President Bush proposed.

Does McCain really think he can get away with having two different Social Security plans? Well, as ThinkProgress has pointed out, McCain was denying his history of supporting private accounts just last month. It seems he just can’t make up his mind. But perhaps having two different positions makes political sense—especially if one of them has already failed.