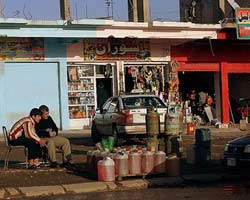 One muggy evening this summer, Qubad Talabani, the 31-year-old son of the president of Iraq, was chatting over drinks at a Dupont Circle bar when his BlackBerry rang. “It’s Ray Hunt,” Talabani said, looking at the caller ID on his phone. The Washington representative of the Iraqi Kurdistan Regional Government apologized for the interruption, and turned away to take the call.

His caller is a man who has no trouble getting his phone calls answered at any hour, anywhere in the world. A Bush/Cheney fundraising Pioneer, a member of Bush’s President’s Foreign Intelligence Advisory Board, and the president of the Dallas-based Hunt Oil company, Ray Hunt is the kind of Texas oilman with easy insider access to the Bush White House. Perhaps not coincidentally, he also heads the first American oil firm to have received an oil exploration contract with the Iraqi Kurdistan Regional Government, announced last September. As such, he has come to epitomize one of the more glaring contradictions about the Bush administration’s policy toward Iraq and its oil wealth. Namely: If the Bush administration, as it proclaims, supports passage of an Iraqi oil law that would share the country’s wealth across ethnic and regional divides, why do Bush-linked companies keep getting Kurdish-area oil concessions that bypass the Iraqi national government?

Hunt Oil isn’t the only one. This week, the Wall Street Journal reported that another Bush administration insider, Richard Perle, had approached Talabani seeking an Iraqi Kurdish oil concession on behalf of a consortium involving Turkish oil companies and the Kazakh government. “The K18 concession, which is estimated to hold 150 million or more barrels of oil, would potentially be operated by Houston-based Endeavour International,” reported the Journal.

The Hunt Oil and Perle-Turkish-Kazakh ventures are among more than twenty oil contracts signed (with dozens more under consideration) by the Kurdish Regional Government, in a process conducted largely in the dark. As troubling, several of the proposed Kurdish oil deals would financially benefit key Washington figures with close ties to the Bush administration.

“Iraq is predicted to pump 70 billion dollars worth of oil this year. That gives them a 50 billion dollar budget surplus,” notes a congressional staffer knowledgeable about the situation. “The administration, Iraqi government, and everyone say that getting this national oil law is a prerequisite for political reconciliation and the US being able to get out sooner. To the extent that the situation is becoming chaotic, it is hurting the chances for that.”

On July 2, Henry Waxman, chairman of the House Committee on Government Oversight and Reform, wrote Secretary of State Condoleezza Rice a letter laying out documents that seemingly contradict Bush administration claims to have been kept mostly in the dark about the Hunt Oil deal with the Kurdish Regional Government.

Included are emails from US advisers on Iraqi reconstruction expressing gratitude that Hunt Oil officials were keeping them apprised of their efforts. As Waxman’s letter to Rice notes:

A Commerce Department official who met with Hunt Oil officials in Kurdistan offered them further support and wished them “a fruitful visit to Kurdistan.” Five days after the announcement of the Hunt Oil contract, a State Department official contacted Hunt Oil to describe another “good opportunity for Hunt” in Iraq, prompting a Hunt Oil official to write Ray Hunt: “This is really good for us…I find it a huge compliment that he is ‘tipping’ us off about this…This is a lucky break.”

Waxman’s letter requested documents from the State Department to help clarify the seeming contradictions in the administration’s position. His congressional oversight committee continues to investigate the Bush administration’s policy on Iraq’s oil deals.

“No one has come out and said there is any current law that specifically prohibits Kurdistan from doing its own oil deals,” says the congressional staffer. “At the very best, [the situation] is very legally ambiguous.”

In the waning days of the Bush administration and its influence over Iraq, it’s an ambiguity that international oil tycoons, Kurdish dynasts, and administration insiders seem eager to exploit while they still can. By the time ambiguities in the current Iraqi law are clarified, such claims may be hard to reverse.

As Talabani told Hunt that muggy evening, it’s hard to discuss further Kurdish oil concessions “while there is so much ambiguity” in the current situation. But, he added, “I’m sure there’s a way we can find common ground.”