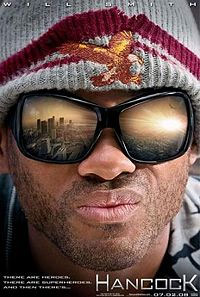 Will Smith’s new movie Hancock may have knocked little Wall-E off the box office top spot, pulling in $62 million in its first weekend, but some are finding evidence of an unsettling subtext behind the drunk-superhero shtick. Hip-hop web site SOHH.com recently posted a blog entry calling the film, well, racist:

It’s just a coincidence that the first “superhero” depicted on the silver screen as a criminal, alcoholic, lazy, foul mouthed, not giving a you know what bum, living in a broken down trailer, who everybody hates including the people he saves, *just happens* to *be black.* Right? And, it’s just a coincidence the one man who loves Hancock, has faith in him and truly cares about him as a person, is an idealistic white man who wants to save the entire planet. Let’s call him the Anti-Bush. Oh and I can’t forget his adorable little son is the only character, besides his loving father, that doesn’t refer to Hancock as an a**hole… And, is it just a coincidence that Hancock only maintains his super powers if he stays away from a “beautiful” white woman who is *technically* his wife …

But, everything changes for friendless Hancock when he saves a white man with a heart of gold and an angel of a son who wants to help Hancock with his “image”. (Because of course America won’t accept an always drinking and cursing black man with a rap sheet, I mean who does he think he is Lil Wayne?) In a matter of minutes he convinces Hancock to turn himself in and go to jail. He even writes his press conference speech for him!

Mr. Save the World then proceeds to “civilize” the savage Hancock by convincing him to stop drinking, shave, wear a hero uniform, treat other people with kindness and consideration, and even how to land without ruining public property.

Jeez, when you put it that way. Our conspiracy-minded blogger goes on to point out that recent Hollywood superheroes played by white actors include “millionare genius scientist Iron Man” and “millionaire playboy martial art expert Batman,” although I will point out that both of them are “troubled.” In general, though, it’s easy to see where he’s coming from: as a viewer of recent queer cinema, I will say I’m getting a little sick of the homo getting brutally murdered in even the most critically-lauded films and TV shows. (Boy, that was depressing). Hollywood may have a rep for being tawdry, but they’ll always follow the money.

As far as Hancock goes, I haven’t seen it (I’m sorry, but Werner Hertzog gets my $10 before Will Smith does), but a commenter on the SOHH post points out there have actually been other recent black cinematic superheroes who aren’t drunk: Blade, for one, and Storm from X-Men, both complex and fully-realized characters. Plus, the slovenly anti-hero isn’t always black: John McClane from Die Hard, for instance. On top of everything, perhaps the film is portraying racism metaphorically, rather than evidencing it itself? Yeah, I’ve always been unclear on the difference there too, and the whole thing about “cleaning up the savage” really gives me the creeps. So, at the risk of blowing up the Riff, I ask you, commenters: is Hancock racist, or are bloggers just paranoid? Or, ultimately, is it hypocritical and pointless to judge works of art by our idealistic political standards?