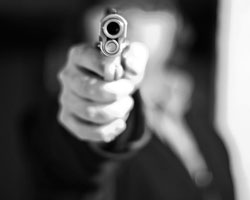 So much for that vaunted era of good will on the Roberts court. The media have been suggesting all year that after all its splintered, contentious decisions in 2007, the Supreme Court’s conservative majority has been working hard to find some common ground with the liberals and to just get along better for the good of the country. The story line seemed to hold up all term, as the court issued one 6-3 or 7-1 decision after another. But today, the court issued a whopper of a 5-4 decision that split entirely on ideological grounds. Saving the biggest case for last, the court ended the term by releasing its opinion in District of Columbia v. Heller, in which the court upheld a lower court ruling invalidating the District’s strict ban on handgun ownership.

The case was unusual in large part because the court hasn’t ruled on a Second Amendment case in 70 years, but also because the Solicitor General—the legal arm of the Bush administration at the court—supported the District, while the Vice President entered into the case on his own to recommend overturning the city’s gun ban. During the oral arguments in the spring, the justices spent a great deal of time mulling over whether early settlers in this country would have needed guns to protect themselves from grizzly bears or for hunting, a sign that the right to bear arms extended beyond the well-regulated militia identified in the language of the Second Amendment. So it’s no surprise that hunting figures prominently in the majority opinion, written by Justice Scalia, who has, of course, spent a great deal of time hunting with the vice president.

Scalia suggests that the District and its supporters (including Justice Stevens, at whom he makes several caustic digs) are foolish to think that the right to bear arms enshrined in the Second Amendment applies only to a military context, given how much hunting those drafters of the Constitution did. He writes, “[I]f “bear arms” means, as the petitioners and the dissent think, the carrying of arms only for military purposes, one simply cannot add “for the purpose of killing game.” The right “to carry arms in the militia for the purpose of killing game” is worthy of the mad hatter. Thus, these purposive qualifying phrases positively establish that “to bear arms” is not limited to military use.”

In his dissent, Justice Stephen Breyer points out that nothing in the District’s handgun ban would have infringed upon city residents’ ability to go hunting. Indeed, unless they really intend to use handguns to shoot rats and pigeons in the alley, D.C. residents have to leave town to find game worth killing anyway. But the practical concerns of the District didn’t carry much weigh with Scalia, who not only struck down the handgun ban, but also found that requiring guns in the home to have trigger locks was also unconstitutional.

The court’s majority did throw a bone to the law enforcement community, which had feared that if the found that the Constitution protected an individual right to bear arms, rather than a collective one, it would severely undercut efforts to keep guns off the street and out of the hands of bad guys. Scalia tries to allay those concerns by writing, “The Court’s opinion should not be taken to cast doubt on longstanding prohibitions on the possession of firearms by felons and the mentally ill, or laws forbidding the carrying of firearms in sensitive places such as schools and government buildings, or laws imposing conditions and qualifications on the commercial sale of arms.”

On a practical level, the decision simply means that for the first time in 30 years, D.C. residents will be able to get a license to keep handguns at home. Since it’s clear that huge numbers of city residents are already keeping guns at home illegally, it’s hard to see how this is going to have much of an impact on things one way or another, though perhaps the rats should start to worry.