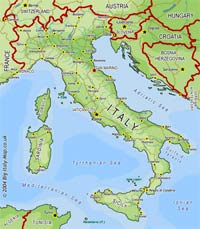 It’s funny; back in my day, kids, Italian dance music meant “Italo-House,” anonymous producers splicing soul vocals onto piano-heavy tracks, like Black Box or the 49ers. You remember “Everybody, Everybody,” right, complete with models lip-synching in the video? Well, perhaps reflecting what the New York Times called “a collective funk” in the land of tasty pasta, Italian electronic music has become surprisingly dark these days. XLR8R has a great roundup of some of the current crop of tough-sounding artists, describing the sound as a variety of musical styles “smashed together, chopped, rewound, sped up, and run through a washing machine.” If you add that the washer is broken and buzzing and 800 feet tall, then I think you’ve got it.

XLR8R lists six up-and-comers; my three favorites are the Bloody Beetroots, Mowgli, and Crookers. Check out this clip of the start of a Beetroots live set in Vienna:

And you thought Justice was hardcore. On a slightly lighter tip, Mowgli apparently moved from Italy to the UK a while back, and his sound has subsequently mellowed; my favorite thing from him recently is a mix of In the Club’s “Turn You On” (grab an mp3 at Palms Out Sounds here) whose wobbly bassline gives way to an indie-rock breakdown.

Crookers, the best of the lot, are kind of a combination of these two facets: funky, but completely bonkers. Check out “We Are Prostitutes” (tell me about it!), which features a huge, hoover-like intro then shifts into a bass line that’s both atonal and oddly hypnotic.

XLR8R’s got more links and info plus another mp3, so props to them. How is Italy making such crazy music? Well, let’s turn back to the Times:

“It’s a country that has lost a little of its will for the future,” said Walter Veltroni, the mayor of Rome and a possible future center-left prime minister. “There is more fear than hope.” The problems are, for the most part, not new — and that is the problem. They have simply caught up to Italy over many years, and no one seems clear on how change can come — or if it is possible anymore at all. … Many worry in the meantime that Italy may share the same fate as the Republic of Venice, based in what many say is the most beautiful of cities, but whose domination of trade with the Near East died with no culminating event. Napoleon’s conquest in 1797 only made it official. Now it is essentially an exquisite corpse, trampled over by millions of tourists. If Italy does not shed its comforts for change, many say, a similar fate awaits it: blocked by past greatness, with aging tourists the questionable source of life, the Florida of Europe.