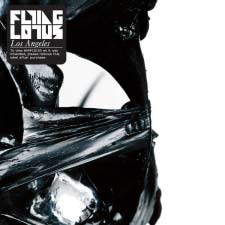 Okay, for those of you not attuned to underground instrumental hip-hop, perhaps that headline didn’t make much sense. Quick background: J Dilla was a groundbreaking producer, real name James Dewitt Yancey, who worked with artists from Common and the Pharcyde to Kanye West and Busta Rhymes. He suffered from lupus, dying in February, 2006, at the heartbreakingly young age of 32. I’ve already blathered endlessly about his genius and the brilliance of his final album, Donuts, a mostly-instrumental work of re-imagined soul and melancholy notes. Dilla’s wonky, spacey style has definitely been influential, but yet it always felt like there were few (if any) hip-hop producers in his realm, creating a sound that’s definitely experimental, but still warm, organic, and full, with an off-kilter, syrupy feel to the rhythm.

Flying Lotus’ origins in Winnetka, California, couldn’t be more removed from J Dilla’s Detroit upbringing, but the 24-year-old producer (aka Steve Ellison) may have established himself as the heir to Yancey with his new album, Los Angeles. Sure, there are the basic similarities: this is crunchy, organic-sounding instrumental hip-hop, with an unashamed love of drums: tracks like “Melt” focus almost entirely on exotic-sounding percussion, similarly to the brief tom-tom-driven “People” from Dilla’s Donuts. But Flying Lotus is no copycat. On last year’s Reset EP, he struck out on a slightly darker, more electronic direction, with mechanical, buzzing tones accompanying quirky samples, and that trend is in evidence on Los Angeles as well: “Riot” features a vibrato electronic bass line, and interludes like the 45-second “Orbit 405” are a cacophony of electronic static and bleeps, like a compilation of all cell phones dialing on the eponymous freeway.

After the jump: Who’s your famous auntie?

It turns out Ellison is the grand-nephew of Alice Coltrane, and there’s a jazzy experimentalism in his blood. When Los Angeles heads into more standard J Dilla territory, utilizing the melodies and traditional instrumentation of classic soul, Flying Lotus still manages to define his own territory. For instance, on the appropriately-named single “RobertaFlack,” there’s a zippy, electronic hum buzzing around the groovy piano melody and romantic crooning, balancing the lazy shaker percussion that’s surely a direct nod to Dilla. The album is on Warp Records, home to Aphex Twin, after all. Ellison himself told Australia’s The Age that he wants his music to be emotional as well as experimental, saying he understands electronic music can be “abrasive,” but that he tries to “make music that you can connect to on a personal level… I want it to be as engaging and warm as possible. It should surround you, envelop you.” Los Angeles does exactly that: while it works perfectly as a hypnotic soundtrack to its namesake city, its diverse influences would make it appropriate on your desert road trip or an Antarctic expedition. Do those icebreaker ships have tape decks?