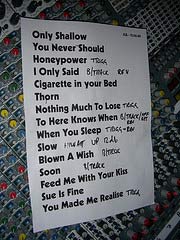 They were some of the most anticipated gigs of the year: on Friday and Saturday nights, the original My Bloody Valentine lineup played two shows at a small venue in London, concerts that were billed as “warm ups” for an upcoming tour, but reports say the band were already turning the volume knobs up to “11.” NME.com reported that the “shoegazing kings delighted their fans” who greeted them with “delirious” cheers, and that the set focused entirely on music released between 1987 and 1991 (when the band was signed to Creation Records), including a 20-minute version of “You Made Me Realise” to close the show. That’ll separate the men from the boys, or at least those willing to indulge endless white-noise freakouts from those who aren’t.

After the jump: So, uh, how much ear damage should attendees expect?

Growing up in Nebraska and then attending college in a semi-rural area of Minnesota, I didn’t have a lot of chances to see live shows from up-and-coming bands back in the day, but somehow I managed to catch My Bloody Valentine at Prince’s legendary First Avenue club in Minneapolis in early 1992. My memories are a bit vague, but I seem to remember it was cold and steely gray outside, and inside, the band made a noise like a million giant vacuum cleaners screaming through space. Being on the floor was like standing in a wind tunnel of noise, and I mean that in the best sense possible: although my ears rang for three days afterwards, a sign of what I can only assume is some permanent hearing loss, it was entirely worth it.

Pitchfork has a good roundup of some Flickr photos as well as the setlist from the recent London shows, if you’re obsessing. The US leg of the tour starts September 22 in New York, hitting Toronto and Chicago before landing in San Francisco, where they’re playing a terrible venue: the Concourse, a former train station whose carpeted floors and strange shape make for almost unbearable acoustics. I’d recommend West Coasters check them out at the Santa Monica Civic October 1-2; just don’t forget those earplugs unless you’re willing to sacrifice for art. And if you’re wondering what all the fuss is about, David Fisher of Florida State University has produced a master’s thesis on the band, an attempt to examine “the elusive aesthetics of shoegaze.” About damn time!

My Bloody Valentine – “To Here Knows When”

Photo of setlist from 6/13/08 gig by Flickr user Kubachek.