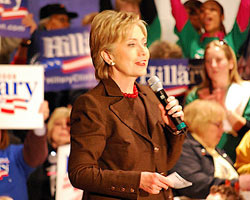 Standing between two soaring pillars in the ornate Great Hall of the National Building Museum in Washington, Hillary Clinton officially brought her campaign to an end Saturday, delivering a moving valedictory that will seal her place as a legendary figure within the Democratic Party—and within our nation’s history itself. Gracious in defeat, effusive in praise for the nominee—she was all the things the talking heads demanded she be, but also much more than that. Unburdened of the pressures of the campaign trail, she spoke openly and directly about the history she and her rival for the Democratic nomination have made by coming this far.

While her speech was one of party unity and reconciliation, the hall was full of Clinton supporters stung deeply by her defeat. “I’m exactly Hillary’s age, so this breaks my heart,” Dianne Cooperman, an IT systems engineer from Maryland, told me. “I’m devastated.” She shook her head. “She came so close.”

Though disappointed, and bitter about the way the press covered Clinton’s candidacy, Cooperman plans to vote for Obama. “Hillary’s a real Democrat and she’ll support the Democrat in the fall. I have the same criteria. And there’s no way I could vote for four more years of the same.”

“The party never really supported her,” she said. “Barack Obama came along and everyone jumped on the bandwagon. It just wasn’t her time, I guess.”

Ogum said that while she won’t make the sorts of donations to Obama that she made to Clinton, she will vote for him. It was a sentiment echoed by almost everyone I spoke to. As Hank Tuzda, a retired Department of Labor employee, put it, “We forget sometimes that their policies are basically the same.”

Clinton acknowledged this in her speech when she said, “The way to continue our fight now—to accomplish the goals for which we stand—is to take our energy, our passion, our strength and do all we can to help elect Barack Obama the next President of the United States.”

Beyond publicly throwing her support behind Obama, she discussed the history-making nature of the Democratic primary campaign. Even in defeat, Clinton declared a measure of victory. “Could a woman really serve as Commander-in-Chief? Well, I think we answered that one,” she said. “And could an African American really be our President? Senator Obama has answered that one. Together Senator Obama and I achieved milestones essential to our progress as a nation, part of our perpetual duty to form a more perfect union.”

And for the first time, she spoke directly and unreservedly about what her quest for the White House means to women:

…When I was asked what it means to be a woman running for President, I always gave the same answer: that I was proud to be running as a woman but I was running because I thought I’d be the best President. But I am a woman, and like millions of women, I know there are still barriers and biases out there, often unconscious.

I want to build an America that respects and embraces the potential of every last one of us.

I ran as a daughter who benefited from opportunities my mother never dreamed of. I ran as a mother who worries about my daughter’s future and a mother who wants to lead all children to brighter tomorrows. To build that future I see, we must make sure that women and men alike understand the struggles of their grandmothers and mothers, and that women enjoy equal opportunities, equal pay, and equal respect. Let us resolve and work toward achieving some very simple propositions: There are no acceptable limits and there are no acceptable prejudices in the twenty-first century.

A Virginia lawyer who only gave me her blog handle, Hecate, said that Clinton’s fight was ultimately thwarted by the forces she was trying to overcome. “Any woman who gets close to a position of power gets treated badly,” she said. “The calls to drop out wouldn’t have happened if she were a man. The attitude was that she needs to let the deserving man have his job.” She added, “This election has ripped the cover off things we like to hide. Lots of young women and female bloggers have had their eyes opened to how sexist our society is.”

In her speech, Clinton mentioned the timeline of progress that Barack Obama often uses in his stump speeches, putting both of them within it and describing how prejudices have been put to rest over time in America.

Think of the suffragists who gathered at Seneca Falls in 1848 and those who kept fighting until women could cast their votes. Think of the abolitionists who struggled and died to see the end of slavery. Think of the civil rights heroes and foot-soldiers who marched, protested and risked their lives to bring about the end to segregation and Jim Crow.

And it was for the opportunity to make this point, I believe, that Clinton didn’t drop out on Tuesday, a night dominated by Obama’s victory. She wanted one last chance to gently remind the public and the press of what had been achieved. Clinton’s hard-fought campaign has paved the way for other women to walk in her path—in the workplace and the classroom, women will see greater opportunities and encounter greater respect because of Hillary Clinton’s bid. And in politics, it likely won’t be long before a woman wins the fight in which Clinton fell just short.