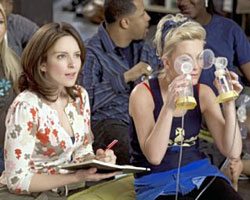 Eventually, your female friends—the ones who married late and retained youthful obsessions with Yo La Tengo and graphic art books until forty—may shock you by having children. This year, at least, they have cinematic alter egos; those millennium Mary Tyler Moores Sarah Jessica Parker and Helen Hunt have left their cosmos and canned laughter behind and gotten knocked up onscreen too. In the process, they have created a new genre: The Fertility Film.

But are the new fertility film stars actually feminists? The heroines of this year’s conception flicks (Smart People, Baby Mama, and Then She Found Me, as well as recent hits Juno, Knocked Up, and the brilliant-but-forgotten Happy Endings) mostly procreated with someone of questionable character: Their stunted inseminators include a childlike ex-husband, a curmudgeonly near stranger, and the trashy boyfriend of a wacky gestational mother. Every one of these embryo pics presents itself as a comedy, but their real themes are dark as pitch. For female viewers of late—or, as they say in the medical profession, “senile”—fertility age, the dilemma of conception is often the first true sign of mortality, decrepitude, and gender inequity. Funny? Not so much.

Fertility films’ inbuilt conflicts are considerably more pungent than their younger chick flick selves. In each film, there are bawling infants born into inconvenient, unhappy unions or to women alone, recovering from awful relationships. In Baby Mama, Tina Fey hires a low-rent surrogate to beget for her. In Smart People, Sarah Jessica Parker plays an accomplished “high strung” doctor who despite being in her early 30s is so eager for offspring that she keeps the baby of her socially inept, older erstwhile boyfriend. The deliriously amusing, not-yet-released Hamlet 2 is a pleasurable anomaly in the midst, as it alone doesn’t feature a woman who for her ambition was cursed with solitude or barrenness, but rather comedian Steven Coogan at a fertility center for “shooting blanks.”

But here’s the thing. I go to see films at the multiplex because they are not good films and so I don’t have to think about things like death, social oppression, or yes, my fertility, while I watch them. The prenatal pics don’t mean to irk their viewers, of course: they are simply a corny replacement for the serrated romantic comedies of the 1940s, in which sparkling, independent female protagonists, sporting sharply tailored suits and sharper repartee, wound up getting their comeuppance in the form of a rake who could finally domesticate them. In fertility movies, the rake taming all female powerhouses is an infant. Worse, embryo pics have inverted another film theme. Women who once chose an unusual life path picked child-free independence—liberated Klutes or unmarried women. Now, conceiving of an infant without marriage or even love is the filmic symbol of independence. In this way, these films recast the “pro-choice” narrative of feminists’ personal and political past as a different, less politically dangerous sort of pro-choice story—a woman’s right to choose from a smorgasbord of late fertility options. Once, in the recent age of “Murphy Brown” having a baby as a single woman was the most rebellious and politically radical thing our heroine could ever do. Now becoming a single mom onscreen makes a film heroine more conventional.

Does that make the storyline less, or more, feminist? After all, the women in the new fertility films are presented as having children not so as to please a social norm. Rather, they do so out of what one social critic has dubbed “maternal desire.”

But the truth is that these films are rather conservative at heart; their entanglements all end far more neatly than their real life counterparts. Teen Juno’s existence fractures into ironic shards with her surrogacy, true, but then Juno gives her infant to an elegant single mom for adoption and all is well. In her fertility film, Helen Hunt’s later life motherhood may have led to uncomfortable issues about biological kinship, but these disruptions are then corrected by motherhood. Same goes for Parker in hers, where her strange romance is relieved of its indie-film angst by the birth of twins. Unlike life, not one female character is disappointed when the new fertility regimen doesn’t work for them, or unhappily trapped in a bizarre family situation when it does. And don’t even think about the bummer that is a legal contract with commercial surrogates.

But fertility films are a popular choice this year as they offer a sunset-and-rainbows kind of Hollywood schmaltz that other films cannot. All of these films end with a love object, a baby that is superior in the eyes of many women than a man would be. In these films, the baby represents eternity and the possibility of absolute devotion. It’s a relationship that, unlike romantic love or marriage, female viewers are thought to believe in without sarcasm.

If only the real life confusion endemic to later pregnancy could be “solved” through upbeat singer-songwriter soundtracks. These films’ endings can’t help but make me wonder: Where are the images of exceptional thirty- and fortysomething women without bassinets?