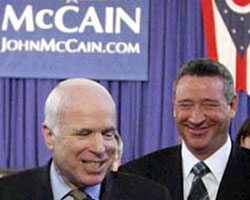 During a 2005 sermon, a fundamentalist pastor whom Senator John McCain has praised and campaigned with called Islam “the greatest religious enemy of our civilization and the world,” claiming that the historic mission of America is to see “this false religion destroyed.” In this taped sermon, currently sold by his megachurch, the Reverend Rod Parsley reiterates and amplifies harsh and derogatory comments about Islam he made in his book, Silent No More, published the same year he delivered these remarks. Meanwhile, McCain has stuck to his stance of not criticizing Parsley, an important political ally in a crucial swing state.

In March 2008—two weeks after McCain appeared with Parsley at a Cincinnati campaign rally, hailing him as “one of the truly great leaders in America, a moral compass, a spiritual guide”—Mother Jones reported that Parsley had urged Christians to wage a “war” to eradicate Islam in his 2005 book. McCain’s campaign refused to respond to questions about Parsley, and the presumptive Republican presidential nominee declined to denounce Parsley’s anti-Islam remarks or renounce his endorsement. At a time when Barack Obama was mired in a searing controversy involving Reverend Jeremiah Wright, McCain escaped any trouble for his political alliance with Parsley, who leads the World Harvest Church, a supersized Pentecostal institution in Columbus, Ohio. Parsley, whose sermons are broadcast around the world, has been credited with helping George W. Bush win Ohio in 2004 by registering social conservatives and encouraging them to vote. McCain certainly would like to see Parsley do the same for him—which could explain his reluctance to do any harm to his relationship with this anti-Islam extremist.

Here’s a video—produced by Mother Jones and Brave New films—highlighting Parsley’s remarks and McCain’s praise of the pastor:

In the 2005 sermon, Parsley repeatedly blasts Islam. “It is not a God of love that is presented to those of the Islamic faith,” he tells his parishioners. He notes that 9/11 was not “anything new,” describing the terrorist attack as merely the latest battle in “a war between Islam and Christian civilization…raging for centuries.” Speaking from the pulpit, and wiping sweat from his brow, Parsley exclaims,

I can’t begin to tell you how important it is that we understand the true nature of Islam. That we see it for what it really is. In fact…I do not believe that our nation can truly fulfill its divine purpose until we understand our historical conflict with Islam…I know that this statement sounds extreme. But I am not shrinking back from its implications. The fact is that…America was founded in part with the intention of seeing this false religion destroyed. And I believe September 11, 2001, was a generational call to arms that we no longer can afford to ignore.

Parsley approvingly quotes Christian theologian Jonathan Edwards’ reference to Islam as “Satan’s Mohammedan kingdom.” He points out that the United States’ first war—the battle against the Barbary Coast pirates—was “waged against Muslim pirates who took our people captive because they believed in a Jesus crucified by the Jews.” (With that one statement, Parsley slams both Islam and Judaism.) He repeatedly refers to the United States’ “historic conflict with Islam,” and adds, “We have no choice. The time has come. In fact, we may be already losing the battle. As I scan the world, I find that Islam at this moment is responsible for more pain, more bloodshed, more devastation than nearly any other force on Earth.”

With the crowd in the pews listening intently, Parsley continues to denigrate Islam, claiming that the religion itself was responsible for 9/11 and that hostility and violence is “the spirit that has come to fill Islam or perhaps that Islam encompassed from the very beginning.” He tries to frighten his followers:

This is about to freak you out…Since September 11, 2001, 34,000 Americans have become Muslims…This means that thousands of Americans have embraced the very religion that inspired the worst assault upon their nation in a generation. Did you know that there are some 1,209 mosques in America? Twenty-five percent of which have been built since 1994. Did you know that there are nearly a billion and a half Muslims in the world…But how would you know it? After all, it’s not in People magazine.

According to Parsley, there’s no coexisitng with Muslims. He tells the tale of a Christian man who once dared to sell land to a mosque rather than to a church—an ominous sign that Christianity is losing the struggle against Islam. “You need to understand today” who was responsible for 9/11, Parsley nearly shouts. “Muslim Islamic fundamentalists and extremists are what did that, and your government and politicians and preachers want you to snuggle up next door to them and allow them to build a mosque next door to your church, while you sing hallelujah.”

The preacher paints a dark picture:

Islam is growing rapidly and is becoming more violent. America has historically understood herself to be a bastion against Islam in the world…History is crashing in upon us…Americans need to wake up…We can tell you…Britney Spears’ lyrics to her latest CD. But we don’t know anything about other religions…’We ought to just all get along’…’We shouldn’t say anything about other faiths.’ Excuse me. Excuse me. The fact is that Americans are woefully ignorant of other faiths. This is not only tragic. But when it comes to Islam, now the greatest religious enemy of our civilization and the world, it’s dangerous.

The problem, Parsley insists, is not radical Muslims who have hijacked a faith, but the religion itself:

In a long riff, Parsley maintains that Muhammad was tricked by a demon into believing that he had heard the word of God. Thus, he asserts, the entire religion of Islam is based upon a satanic deception: “Muhammad was tragically beset by a demon which he mistook for the living God. He thus became a mouthpiece of a conspiracy of spiritual evil…There are so few who will talk about [this].”

But Parsley is willing. And he also readily offered McCain his endorsement during that February 26, 2008, campaign rally in Cincinnati. At the event, McCain extolled Parsley for his “leadership” and “guidance.” Since then, McCain aides have said that the senator’s acceptance of Parsley’s endorsement was not an endorsement of Parsley’s views. And they have dismissed any comparison between Reverend Wright and Reverend Parsley, noting that McCain has never attended a service conducted by Parsley. But imagine if Barack Obama had campaigned with an imam who had called for destroying Christianity. A media and political uproar would ensue—with wide-ranging calls for Obama to condemn the imam.

McCain has also refused to reject the endorsement he received from the Reverend John Hagee, a Texas-based televangelist who referred to the Catholic Church as “the great whore” and a “false cult system” and who called Hurricane Katrina retribution from God for the sins of New Orleans’ homosexual residents. But Parsley may be the more politically crucial pastor for McCain. McCain probably cannot win Ohio in November without the support of large numbers of social conservative voters. In 2004, Parsley, whose megachurch boasts thousands of members, led so-called values voters to the polls, where they helped propel George W. Bush to victory over John Kerry. If McCain were to repudiate Parsley, he would risk losing Parsley as a surrogate and, perhaps worse, alienate his flock. So McCain has ducked, keeping quiet about an anti-Islam extremist who repeatedly proclaims in sermons, “I will be silent no more.”