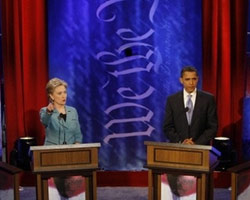 The Reverend Wright controversy, the flag pin controversy, and the William Ayers controversy were all dying or dead. Now, they’re back in the headlines.

In lieu of questions on education, the environment, trade, health care, or almost any other serious issue, the moderators of Wednesday’s Democratic presidential primary debate on ABC chose to reinvigorate what Barack Obama called “manufactured” issues.

“Manufactured” issues are ones the media and the blogosphere believe should be a big deal, and treat as such, even if there is little evidence that voters really care about them. They are less frequently about a controversial position on a serious topic, since no mainstream presidential candidate ever dares to take one of those, than they are guilt-by-association situations that say little or nothing about the candidate him or herself.

William Ayers is a perfect example of this. Ayers was part of a domestic terror group from the ’60s and ’70s called the Weather Underground or the Weathermen. Obama knows Ayers and his wife, also a member of the Weather Underground, because they ran in the same Chicago political circles in the 1990s. Ayers hosted the event in which Obama was unveiled as a state senate candidate, and gave money to Obama’s state senate reelection campaign in 2001. The men are not friends, though they have been described in the past as friendly. Ayers, now a professor at the University of Illinois at Chicago, declines to disavow his past, leaving Obama open to headlines like “Obama worked with terrorist.”

In Obama’s response to questions about Ayers in the debate today, he pointed out the absurdity of the guilt-by-association game that so often captures the daily coverage of presidential politics.

…the notion that somehow as a consequence of me knowing somebody who engaged in detestable acts 40 years ago when I was 8 years old, somehow reflects on me and my values, doesn’t make much sense…

The fact is, is that I’m also friendly with Tom Coburn, one of the most conservative Republicans in the United States Senate, who during his campaign once said that it might be appropriate to apply the death penalty to those who carried out abortions.

Do I need to apologize for Mr. Coburn’s statements? Because I certainly don’t agree with those either.

So this kind of game, in which anybody who I know, regardless of how flimsy the relationship is, is somehow — somehow their ideas could be attributed to me — I think the American people are smarter than that. They’re not going to suggest somehow that that is reflective of my views, because it obviously isn’t.

There’s no evidence that voters treat issues like the Ayers controversy with the importance that reporters do. There is no national polling to suggest the Reverend Wright controversy has affected Obama’s standing in the eyes of the American people, and its safe to say that the Ayers situation is likely too uninteresting or too complicated or too fundamentally silly to cause many Pennsylvanians to switch their vote. But it looks, smells, and feels damaging (and the Clinton campaign will harp on whenever given the opportunity, as Senator Clinton did in the debate and her press team did on the networks afterward) so members of the press will cover it. But they will likely go from covering the non-story to covering the public’s lack of serious response to the non-story, betraying their own inanity in the process.

In the end, the moderators’ dissection of the “manufactured” issues of the campaign are unlikely to create a fundamental shift in the race. Most of the sniper fire (with the exception of one question about actual sniper fire) was directed at Obama, but for all his ducking and weaving he never really got hit. To use a different metaphor, there was no knockout blow that is going to send Pennsylvania voters and undecided superdelegates scurrying to Clinton. The big loser was the press, who was represented to millions of viewers by two moderators who insulted the public’s interest in serious issues and who appeared to relish the worst campaign season has to offer. Is that guilt-by-association? So be it.

[Ed. Note: For a minute-by-minute liveblog of the debate, with only a moderate amount of snark, click here.]