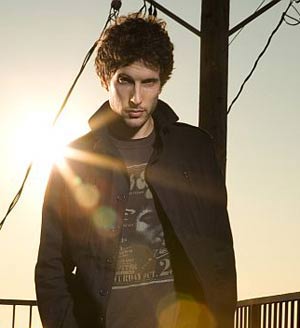 One of the more intriguing artists on this weekend’s Coachella festival lineup, Yoav is Israeli-born, South Africa-raised, and now London-based. His complicated background might remind you of the Argentinian-Swedish José González, and they also share a focus on the acoustic guitar (as well as diverse musical influences). But while González turns bleak tracks like Massive Attack’s “Teardrop” into plaintive ballads, Yoav incorporates effects and treatments into his guitar work to create original music that somehow straddles the line between folk and minimal electronica, with an accessible pop straightforwardness. His debut album, Charmed & Strange, features sounds that you wouldn’t expect to hear come out of a guitar: staccato blips, hip-hop thuds, and, on a haunting cover of The Pixies’ “Where is My Mind,” eerie whines and soft echoing tones. The Riff caught up with Yoav between gigs and tossed a couple quick questions his way.

Lots of musicians seem interested in self-denial these days: The White Stripes, with their wardrobe restrictions and quick recording times, or José González, with his campfire versions of electronic songs. Whatever happened to good old rock star self-indulgence and a warehouse full of instruments?

With technology and the internet and the mass of music out there expanding and exploding boundaries and possibilities, it’s your limitations that define you and set you apart from everybody else.

Despite the fact that you’re creating most of this music using only an acoustic guitar, it seems to have more in common with the minimal techno of, say, Kompakt records. Where would you feel more comfortable, a German rave, or an American folk-rock festival?

I think both would be OK, though I would probably play slightly different sets. My last two opening slots were for Underworld and Tori Amos—two rather different audiences. I was a bit concerned that as a solo guitarist walking on stage barefoot, I might get pelted with something before I even got to play a note, but actually both shows went down a storm.

You’re performing at some intimate clubs on the West Coast in the next few weeks as well as the Coachella festival. How should we act at your shows, do we need to be quiet, like at a Low concert, or can we dance and whistle and stuff?

Well,since you’re asking, ideally hushed during and raucous after, unless it’s a dancey number and then ecstatic dancing would be very pleasing. The shows where I have got the whole crowd moving are the most fun.

I tried looking up Yoav on Wikipedia and it brought me instead to Joab, biblical warrior, slayer of Abner, Uriah and Amasa. He sounds totally scary. Do you, too, come not to bring peace but with a sword?

Well, you know what they say about the pen being mightier than the sword… I wouldn’t mind rustling up a little bit of chaos with my words and tunes, but all in the name of peace I suppose.

For tunes check out the Yoav MySpace and his official website.