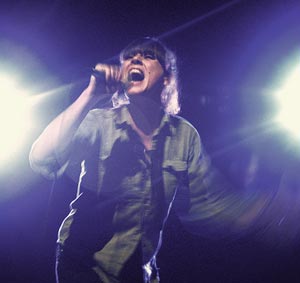 It used to be that you’d go to a Cat Power show with some anxiety, like a dinner with one of your friends who drinks too much and has a tendency to freak out and get loud. But these days, Chan Marshall has cleaned up her act, and while the volatility is gone, it’s been replaced by a feeling that she’s holding back.

My review of her latest album, Jukebox, lauded her soulful (and sometimes barely-recognizable) takes on the standards, and on Tuesday night, we got three standout Jukebox tracks right away: The Highwaymen’s “Silver Stallion,” during which Marshall paced relentlessly around the stage, stretching her microphone cord to the limit; “New York, New York,” which came off even more smoky and dark than on CD; and best of all, “Ramblin’ (Wo)Man,” twisted to evoke early Portishead with a lethargic tempo and throbbing electric piano. Sadly, as other reviews of this tour have pointed out, Marshall’s whispery voice can get buried under the band, barely audible, much less intelligible. And when the show is all about a solo artist, you kind of want to hear them.

After the jump: can a Cat get a spotlight? 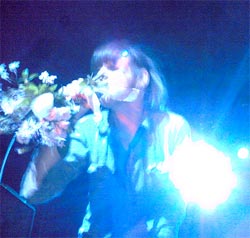 You also want to see them, and much of the time, Marshall strode the stage in the dark, illuminated only by the red glow and subsequent flashes of cameras. She would sometimes awkwardly ask for a spotlight, only to return to the shadows for the next number. When there’s actually enough light to see her, she’s got some quirky dance moves, but sometimes just seems restless: during her impassioned cover of Fleetwood Mac’s “Dreams,” she appeared to be performing a kind of feng shui on the stage, moving her mic stand back and forth, trying to find the right spot, hoping the energy would start to flow.

The wait for an encore stretched on endlessly, giving us a brief glimpse of the old Chan, notorious for mood-killing gaps between songs. But finally, she re-emerged, and the opening chords of “The Greatest” are greeted with wild applause. She’s handed a small bouquet of white flowers that she clutches through the encore. It’s all part of the package, I guess, and there are clearly those who are so drawn to fragility that they’ll cheer even small victories. Of course, she’s come a long way: she can face the audience now and everything. But, frankly, the ethereal atmosphere she creates on record is mostly absent in person, and her on-stage persona is still hidden, timidly, behind a veil.