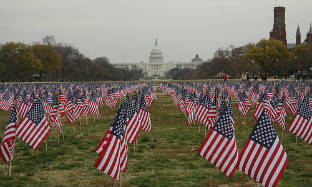 Following on yesterday’s lackluster performance by their Senate colleagues, House Democrats, if this morning’s Armed Services Committee hearing is any indication, will show themselves to be equally cowed by General David Petraeus and Ambassador Ryan Crocker, the top-ranking military and diplomatic figures in Iraq, and just as unwilling to bring serious challenge to the larger theme promulgated by the morning’s testimony—namely that, while “reversible,” security (if not political) gains in Iraq are real and the result of an enlightened strategy. Certainly, in this morning’s hearing, Democrats failed to subject their witnesses to the sort of aggressive questioning we might have expected from a party that took control of the Congress determined to challenge Bush administration policy in Iraq and, as of last summer, remained determined to affect significant short-term troop withdrawals.

This is not say that there was no loyal opposition to the Petraeus/Crocker message of cautious optimism, but simply to call attention to how exceedingly, excessively, and deferentially loyal it was. Perhaps the most significant challenge to the administration’s narrative came from Rep. John Spratt, Democrat of South Carolina, who used his allotted five minutes to display charts showing the tremendous cost of the war to date, as well as projections from the Congressional Budget Office (the Pentagon refuses to speculate on such things) that by 2018, assuming troop levels have already declined to 75,000 by 2013, the U.S. government will have shelled out more than $2 trillion for operations in Iraq and Afghanistan. The point, Spratt said, was that “whenever you spend $2 trillion on one thing, you don’t have it for something else”—whether that “something else” is stepped up operations in Afghanistan, reinvestment in the strategic readiness of U.S. forces for future high-intensity conflicts, or any number of other things you can imagine the federal government might do with a couple trillion bucks.

Don’t get me wrong, the war’s costs are certainly an important consideration and one that, as with so many things, highlights a significant miscalculation by the Bush White House in its planning for the war, but complaints about dollars and cents lack emotional force and are far from the sharpest arrows in the Democrats’ quiver. If they want to reignite the Iraq debate, why not concentrate on how, five years after the invasion, tonight folks in the Green Zone will be sleeping under their desks to avoid incoming mortar and rocket fire? Why not focus on how our arming of Sunni militias, as beneficial as it may be in the short-term, could fuel an ethnic civil war after our departure from Iraq? Why not hammer away at the continuing lack of readiness among Iraqi security forces, as demonstrated by their recent embarrassment in Basra? (When asked about the latter, Petraeus deflected the question with praise for the Iraqi military’s growing logistical capability. “The deployment was very impressive,” he said, and “never could have happened a year ago.”)

Yes, it seems the fire and brimstone the Democrats promised has become a drizzle. Rather than aggressive questioning from an outraged Congress, the only real challenge Petraeus and Crocker are likely to face in their one remaining appearance, before the House Foreign Affairs Committee this afternoon, may simply be to stay awake through the many hours of softballs being tossed in their direction.

Photo used under a Creative Commons license from dbking.