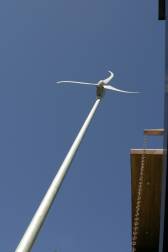 It is the greenest home in the city of San Francisco, and one of the greenest in the world. Nestled in the city’s Mission district amidst old and colorful Victorians, La Casa Verde is built entirely from sustainable and recycled materials, has a green roof and solar panels, and draws 40% of its energy from a single wind turbine (.pdf), which rises 45 feet in the air.

San Francisco mayor Gavin Newsom loves it—unsurprising, considering the many green initiatives he’s supported in the city. He couldn’t stop talking about how “great” and “fantastic” he thought La Casa was as he toured the building this morning, and listened attentively as homeowner Robin Wilson described the building’s many green features: the countertops made from discarded rice hulls, the recycled flooring, the chandelier whose shimmering LED lights will last for over 15 years. “This is not a modest or symbolic effort,” he commented. “This is real. This is not fanciful.”

And for San Francisco residents, “real” green housing is about to be a lot more attainable. Speaking to reporters after the tour, Newsom announced that he is creating a residential wind working group, tasked with figuring out how to revamp the city’s zoning and building codes to allow wind turbines on private lots. If implemented, it would be the first urban program of its kind.

It’s possible this is a pipe dream, as the announcement seemed to take Newsom’s staff by surprise. “I guess we’re doing residential wind,” said deputy communications director Brian Purchia, adding that although the idea had come up before, he hadn’t realized it was a go. But Newsom insists that his commitment is both firm and pragmatic. “This is who I am, this is what I want to do,” he said, emphasizing that the project, along with the city’s other green policies, would survive even the worst opposition or budget cuts. “Money is an excuse,” he said. “It’s never the problem. Money always follows great ideas.”

It’s a good thing he’s confident, because homes like Wilson’s don’t come cheap: Greening La Casa cost her several million dollars. Wilson, a local green contractor who began remodeling the house in 2006, says she’s aware that the price tag is not for everyone. What she wanted, she says, was to give people an idea of what was possible, an inspiration. “I want people to be able to pick and choose what works for them,” she said. Newsom, meanwhile, said that the city plans to find a way to make green choices affordable, through a combination of financial incentives as well as a carbon tax that he will place on the ballot in November. Going green makes financial sense, he said, and businesses know it. “This is going to be mandated very soon,” he said. “In 15 years, you’re not going to be able to build in San Francisco without doing everything she’s done and more.”