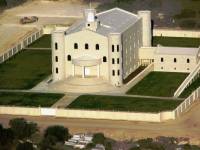 It’s been five days since authorities raided the Yearning for Zion Ranch, a compound outside Eldorado, Texas owned by the Fundamentalist Church of Jesus Christ of the Latter Day Saints. Tipped off by a phone call from a 16-year-old girl who said she had been repeatedly “beat and hurt” by her middle-aged husband, the cops stormed Yearning for Zion and took 419 children into custody, accompanied by 139 of their mothers, into custody.

To be sure, Yearning for Zion sounds like a horror show. But is it polygamy’s fault? I mean, “the principle” seems to work okay on Big Love, right? I wanted a plural marriage expert to weigh in. After an admittedly quick Internet search, I decided on John Llewellyn, a retired Salt Lake County Sheriff’s Lieutenant who has been involved with a bunch of polygamy investigations. Once he started talking, though, it was clear that Llewellyn had some pretty strong opinions about plural marriage, and with good reason: He used to be a polygamist himself.

At the beginning of his career with the Salt Lake City Sheriff’s Department, Llewellyn and his young family became active in Church of Jesus Christ of the Latter Day Saints (the Mitt Romney kind of Mormons; they will be the first to tell you that they have noting—they said NOTHING—to do with polygamy). A young single mother asked him to be her children’s godfather, and somehow that turned into a request to be his second wife. To Llewellyn’s surprise, his first wife acquiesced, and thus began his involvement with the Apostolic United Brethren. He quickly discovered that polygamy wasn’t for him—he didn’t like how it pitted women against each other. Twenty years later, he left the church with his second wife. (His original wife, he says, chose to be “the fifth wife in a more affluent family.”)

Since then, Llewellyn has written several books about life in polygamist communities. These days, he’s made it his mission to spread the word about the evils of plural marriage, which he calls “a barbaric custom…to accept it is like going back to the Middle Ages.” And he’s given up church life, too. “I don’t want anything to come between me and God,” he says. “If there is a God, I’ll handle my own salvation. I don’t need a pope or a prophet to come between me and God.” I asked Lewellyn a few questions about the Yearning for Zion raid, and, uh, he didn’t mince words. Q&A after the jump.

Me: What’s so bad about polygamy?

John Llewellyn: It’s unnatural for a woman to want to share her husband with other women. The typical woman who converts to polygamy is a single mom who has had a bad relationship, and she is struggling. She finds that in becoming a plural wife there is some security and unity and she is accepted. It’s a hard lifestyle. There’s jealousies, and when these pro-polygamists tell you they’re no longer jealous, that’s malarkey. There’s always jealousy and competition for who is going to be the favorite wife, or the dominant wife, and which children are going to be the favorite children.

Me: The Texas authorities have known about this for a while. Why did they just raid now?

JL: I haven’t been in touch with them, but I think because of my law enforcement experience I can tell what is happening. It appears to me that they were waiting for something like this to happen. You have to have probable cause before you can go onto this private property. The phone call established that probable cause. Once on the property, they couldn’t help but observe these young pregnant girls. So all the stories they heard had been confirmed. They had to take some action. They would have been derelict if they hadn’t. What they are doing is what Utah should have done years ago, but they were timid because of the debacle that occurred in 1953 when they raided Short Creek. Everything backfired on them, and public support was with the polygamists because they had photos of law enforcement tearing little babies out of mothers’ arms.

Me: They haven’t found the teenager who made the call yet. Do you think she’s real?

JL: I think she really exists. It sounds very credible, what she has said. It was two days before they entered the premises looking for her, and that would have given them ample time to get her out of there, and they’ve done that in the past with young, rebellious women. She might be in Canada now, she might be in one of several places. They have communities in South Dakota and Nevada, for example.

Me: What consequences would she face on the ranch if they found out she had made the call?

JL: She would be isolated, shipped off someplace, locked up, and continually brainwashed until she finally submitted. This is standard procedure. They don’t like these young girls leaving because of what they could say.

Me: They’ve taken 419 children from the ranch into custody. What’ll happen to them?

JL: They can’t deprive those children of their parents without some good reason. I think in the meantime the big challenge for the Texas authorities will be to change the kids’ thinking. These children have been raised to believe that the government and the nonbelievers are their enemies. They’re going to have to convince those kids that there’s a better life outside. But to be free is really quite scary when every aspect of your life has been controlled. These kids are brought up to believe that if they leave the group they will go to Hell.

Me: Have you seen the show Big Love? Is it plausible?

JL: In some respects. But that family, they are the exception, rather than the rule.