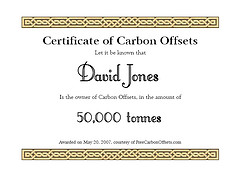 A typical American life offers no shortage of carbon sins to offset. Eco-conscious consumers can offset their air travel, their weddings, even their offspring. But so far, no one (that we know of, anyway) has gone whole hog and offset everything they’ve emitted, ever.

Enter Brad Mewhort, 33-year-old vegan, pedestrian, and apologetic air traveler. Earlier this month, carbon offset nonprofit Carbonfund.org announced that that the Seattle sales rep had just finished scrubbing his imprint from the Earth by donating the last $1,500 of a $3,000 contribution to the group. The three grand covers emissions even from family car trips when Mewhort was young, as well as all of the plane trips he must take for his job, and the recent journey to Antarctica that convinced him it was time to take action.

“I was absolutely amazed by what I saw there,” says Mewhort. “It was the most beautiful thing I had ever seen. I love penguins, I always have, and they’re more incredible than I expected. Their habitat is directly threatened by the impacts of human activity. I decided that I don’t want to be personally contributing to this destruction. I decided to purchase offsets as soon as I could.”

Mewhort explains that he calculates his emissions annually, and that he will continue to do so for the rest of his life. Though he doesn’t have a family, he says that if he were to have one, he would feel obligated to offset their emissions as well. How much might this cost over the course of a lifetime? The UN estimates the average American emits more than 3 million pounds of carbon over an average 78-year lifespan. It’s tough to say whether Mewhort’s emissions will be lower or higher—on the one hand, he’s taken a number of steps to minimize his own emissions; on the other, he has no way of knowing what he might emit in the future, and any number of factors could come into play. In addition, although he has specified that his money go towards renewable energy projects, Carbonfund.org does not provide detailed explanations of how the projects work or update Mewhort on their progress.

Mewhort says he knows that offsets are only one tactic, but that he hopes other people will see it as a feasible one. “It’s not just offsetting that amount of carbon, it’s also putting money into an area that could have larger benefits,” he says. “It’s better than doing nothing.”

Photo used under a Creative Commons license from cloudsoup.