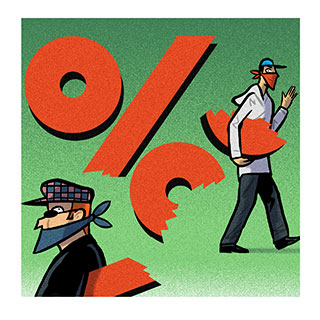 Corporations “restating” earnings; fawning business media; chief executives diverting the blame; Securities and Exchange Commission probes initiated after the damage is done. This Enron-WorldCom déjà vu is brought to us courtesy of America’s housing industry, and the standard narrative is that irrationally exuberant buyers drove up home values while banks made too many loans to the wrong people. The truth, however, is that this latest boom-and-bust is about stock prices as much as housing prices—and that’s where the real scandal lurks.

Skyrocketing home prices dominated the headlines during the boom, but they were nothing compared to the bubble experienced by Wall Street’s housing sector. From early 2002 through late 2005, average home prices rose about 32 percent nationwide, but the paper value of companies like Countrywide Financial, Beazer Homes, and New Century Financial skyrocketed at least 10 times as fast, with their shares posting gains of 300 to 400 percent.

Now those stocks are in free fall—and lurking behind the hand-wringing about overextended buyers and dubious lending practices are the other key culprits: the ceos who misrepresented their books and cashed out before the public knew what was happening, and the credulous finance reporters and securities analysts who cheered them along until it was too late. And let’s not leave out the sec—the body charged with protecting the stock-buying public from just this kind of trickery—which stood by and watched as the signs of trouble accumulated. Investigations of housing-sector fraud are only now ramping up, long after they should have. As Gary Aguirre, a former senior investigative counsel for the commission, told me, “It’s only once news hits the headlines and the shock waves and consequences are out there that the SEC will get involved.”

It didn’t take a genius to see this coming. Companies have to file key data about their performance with the sec each quarter, and business reporters as well as analysts should know perfectly well how to spot the gaps between rosy rhetoric and the hard financials. Digging into those numbers was something I did all the time as a managing director for Goldman Sachs and for other Wall Street firms. So I selected one big housing company as a test case, just to see what its filings might reveal.

Lennar Corporation is a Florida-based home builder (motto: “Everything you want. Everything you need.”) that Fortune identified in 2003 as one of America’s 100 fastest-growing companies. I started with its press releases: In March of 2006, Lennar ceo Stuart Miller cooed that his company expected a record year with earnings per share (a standard measure of corporate profitability) of $9.25—this at a time, remember, when headlines about the cooling housing market were already ubiquitous. The prediction also seemed highly ambitious given that Lennar’s earnings for the first quarter of ’06 were only a buck and change. Three months later, with the housing market still in the doldrums, Lennar reported second-quarter earnings of $2 per share, an impressive gain, though still far short of what Miller would need to meet his goal for the year. The company also reported that its revenues from home sales were up 53 percent from the second quarter of 2005—the peak of the building frenzy—and it boasted that it had delivered 40 percent more homes to customers, and increased prices 10 percent. All these sexy numbers made it easy to miss an ominous sign further down in the second-quarter press release: Lennar’s profit per house sold was declining. Yet the company still predicted it would do better for the rest of the year than it had the first six months—with earnings per share totaling another $4.50 or so.

A month later, Lennar announced that it had worked out a deal with its bankers to add $1 billion to its credit line—an expanded safety net that could be seen as a sign of weakness in a contracting housing market. Then came the third-quarter results: new orders down 5 percent, profit per house down again, earnings per share a paltry $1.30—although the company led its press release with a 20 percent rise in revenues. After that, gains turned to losses, and Lennar quit touting numbers in the titles of its public statements. (All the while, analysts such as Citigroup’s Stephen Kim urged people to buy Lennar’s stock—Kim did so until July 2007, as the share price neared the midpoint of last year’s 64 percent plunge.)

In November of 2007, the company formed a side partnership with a Morgan Stanley affiliate to purchase Lennar’s stockpiled property—msr Holding Company paid only 40 cents for each dollar Lennar had ascribed to its real estate, raising the question of whether Lennar had overestimated land values, or was merely trying to cut its losses.

As with many companies, there’s nothing in Lennar’s public data that reeks of mischief. The point is that even as their market imploded, big housing companies were claiming puzzlingly positive results, playing down the mayhem any intelligent ceo knew was imminent, and ultimately setting up the economy for a rude awakening.

Sure enough, although the sec waited until last March to form a “subprime working group,” indications of blatant misbehavior are proving plentiful. In October, the commission launched a probe of Countrywide, the nation’s largest lender, regarding the questionable timing of a $130 million stock sale by ceo Angelo R. Mozilo. Around the same time, the commission began looking into reports that Beazer Homes, one of the nation’s largest home builders, had exaggerated its earnings starting in 2004. The sec has also been looking at KB Home, the nation’s fifth-largest home builder, over allegations that former ceo Bruce Karatz—paid $50 million at the boom’s pinnacle in 2005—further inflated his compensation by backdating stock options, which is akin to betting on a horse race that’s already been run.

Then there are the companies that have gone belly-up even as executives cleaned up: The founders of New Century Financial, once the nation’s second-largest subprime lender, dumped millions of dollars’ worth of stock just months before the company’s April bankruptcy—the sec is now investigating the company. And last October, the fbi opened an investigation into criminal misconduct at American Home Mortgage, one of the nation’s largest loan originators, which went bankrupt in August of that year. Shareholders have also filed more than a dozen civil suits claiming that American Home executives misrepresented the firm’s finances; the sec, so far, has demurred. Spokesman Kevin Callahan would not comment on specific investigations.

The chattering classes still blame desperate borrowers for not reading the fine print, but perhaps they should reserve some vitriol for Wall Street’s watchdog. If there’s one lesson the commission should have learned long ago, it’s that booms aren’t fueled by market forces alone, but also by healthy doses of fraud, deception, and unchecked opportunism. And it’s invariably everyday folks who pay the price. “The SEC, instead of watching Wall Street, insulates it,” notes Aguirre. “The subprime issue is a direct consequence of the sec‘s failure to act proactively to intercept fraud as it develops.”