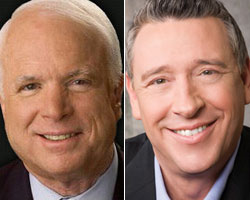 Senator John McCain hailed as a spiritual adviser an Ohio megachurch pastor who has called upon Christians to wage a “war” against the “false religion” of Islam with the aim of destroying it.

On February 26, McCain appeared at a campaign rally in Cincinnati with the Reverend Rod Parsley of the World Harvest Church of Columbus, a supersize Pentecostal institution that features a 5,200-seat sanctuary, a television studio (where Parsley tapes a weekly show), and a 122,000-square-foot Ministry Activity Center. That day, a week before the Ohio primary, Parsley praised the Republican presidential front-runner as a “strong, true, consistent conservative.” The endorsement was important for McCain, who at the time was trying to put an end to the lingering challenge from former Arkansas governor Mike Huckabee, a favorite among Christian evangelicals. A politically influential figure in Ohio, Parsley could also play a key role in McCain’s effort to win this bellwether state in the general election. McCain, with Parsley by his side at the Cincinnati rally, called the evangelical minister a “spiritual guide.”

The leader of a 12,000-member congregation, Parsley has written several books outlining his fundamentalist religious outlook, including the 2005 Silent No More. In this work, Parsley decries the “spiritual desperation” of the United States, and he blasts away at the usual suspects: activist judges, civil libertarians who advocate the separation of church and state, the homosexual “culture” (“homosexuals are anything but happy and carefree”), the “abortion industry,” and the crass and profane entertainment industry. And Parsley targets another profound threat to the United States: the religion of Islam.

In a chapter titled “Islam: The Deception of Allah,” Parsley warns there is a “war between Islam and Christian civilization.” He continues:

I cannot tell you how important it is that we understand the true nature of Islam, that we see it for what it really is. In fact, I will tell you this: I do not believe our country can truly fulfill its divine purpose until we understand our historical conflict with Islam. I know that this statement sounds extreme, but I do not shrink from its implications. The fact is that America was founded, in part, with the intention of seeing this false religion destroyed, and I believe September 11, 2001, was a generational call to arms that we can no longer ignore.

Parsley is not shy about his desire to obliterate Islam. In Silent No More, he notes—approvingly—that Christopher Columbus shared the same goal: “It was to defeat Islam, among other dreams, that Christopher Columbus sailed to the New World in 1492…Columbus dreamed of defeating the armies of Islam with the armies of Europe made mighty by the wealth of the New World. It was this dream that, in part, began America.” He urges his readers to realize that a confrontation between Christianity and Islam is unavoidable: “We find now we have no choice. The time has come.” And he has bad news: “We may already be losing the battle. As I scan the world, I find that Islam is responsible for more pain, more bloodshed, and more devastation than nearly any other force on earth at this moment.”

Parsley claims that Islam is an “anti-Christ religion” predicated on “deception.” The Muslim prophet Muhammad, he writes, “received revelations from demons and not from the true God.” And he emphasizes this point: “Allah was a demon spirit.” Parsley does not differentiate between violent Islamic extremists and other followers of the religion:

There are some, of course, who will say that the violence I cite is the exception and not the rule. I beg to differ. I will counter, respectfully, that what some call “extremists” are instead mainstream believers who are drawing from the well at the very heart of Islam.

The spirit of Islam, he maintains, is one of hostility. He asserts that the religion “inspired” the 9/11 attacks. He bemoans the fact that in the years after 9/11, 34,000 Americans “have become Muslim” and that there are “some 1,209 mosques” in America. Islam, he declares, is a “faith that fully intends to conquer the world” through violence. The United States, he insists, “has historically understood herself as a bastion against Islam,” but “history is crashing in upon us.”

At the end of his chapter on Islam, Parsley asks, “Are we a Christian nation? I say yes.” Without specifying what actions should be taken to eradicate the religion, he essentially calls for a new crusade.

Parsley, who refers to himself as a “Christocrat,” is no stranger to controversy. In 2007, the grassroots organization he founded, the Center for Moral Clarity, called for prosecuting people who commit adultery. In January, he compared Planned Parenthood to Nazis. In the past Parsley’s church has been accused of engaging in pro-Republican partisan activities in violation of its tax-exempt status.

Why would McCain court Parsley? He has long had trouble figuring out how to deal with Christian fundamentalists, an important bloc for the Republican Party. During his 2000 presidential bid, he referred to Pat Robertson and Jerry Falwell as “agents of intolerance.” But six years later, as he readied himself for another White House run, McCain repudiated that remark. More recently, his campaign hit a rough patch when he accepted the endorsement of the Reverend John Hagee, a Texas televangelist who has called the Catholic Church “the great whore” and a “false cult system.” After the Catholic League protested and called on McCain to renounce Hagee’s support, the presumptive Republican presidential nominee praised Hagee’s spiritual leadership and support of Israel and said that “when [Hagee] endorses me, it does not mean that I embrace everything that he stands for or believes in.” After being further criticized for his Hagee connection, McCain backed off slightly, saying, “I repudiate any comments that are made, including Pastor Hagee’s, if they are anti-Catholic or offensive to Catholics.” But McCain did not renounce Hagee’s endorsement.

McCain’s relationship with Parsley is politically significant. In 2004, Parsley’s church was credited with driving Christian fundamentalist voters to the polls for George W. Bush. With Ohio expected to again be a decisive state in the presidential contest, Parsley’s World Harvest Church and an affiliated entity called Reformation Ohio, which registers voters, could be important players within this battleground state. Considering that the Ohio Republican Party has been decimated by various political scandals and that a popular Democrat, Ted Strickland, is now the state’s governor, McCain and the Republicans will need all the help they can get in the Buckeye State this fall. It’s a real question: Can McCain win the presidency without Parsley?

The McCain campaign did not respond to a request for comment regarding Parsley and his anti-Islam writings. Parsley did not return a call seeking comment.

“The last thing I want to be is another screaming voice moving people to extremes and provoking them to folly in the name of patriotism,” Parsley writes in Silent No More. Provoking people to holy war is another matter. About that, McCain so far is silent.