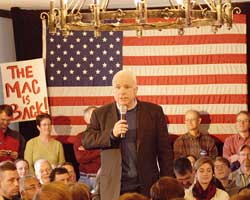 On January 9, 2003—five years before he would become the Republican Party’s presumptive presidential nominee—Senator John McCain strode to the Senate floor and began a speech by citing the National Academy of Sciences: “Greenhouse gases are accumulating in the Earth’s atmosphere as a result of human activities, causing surface air temperatures and subsurface ocean temperatures to rise.” He then pointed to a host of scientific studies that had outlined the negative consequences of global warming. “The United States must do something,” he proclaimed, announcing that he and Senator Joseph Lieberman were introducing legislation that day to establish mandatory limits on greenhouse gas emissions and set up a system for the trading of emissions credits.

Environmental groups endorsed the McCain-Lieberman bill, which compelled major industries to reduce greenhouse gases to 2000 levels by 2010. The League of Conservation Voters called it “a relatively modest reduction” but an “important first step” that would “send an important signal to the global community.” It was indeed the first serious attempt in the Senate to impose a cap on global warming emissions.

Ten months later, the bill was defeated by a relatively close margin, 55 to 43. (Then-Senator John Edwards, who missed the vote, had indicated he supported the bill.) Environmental advocates in Washington considered this a decent start considering that six years earlier the Senate had voted unanimously for a nonbinding resolution that signaled opposition to the Kyoto global warming treaty. With this bill, McCain established himself as the undisputed Republican leader on climate change. Convinced that global warming had already led to more droughts and wildfires in his home state of Arizona, McCain vowed to keep fighting for the measure. But within a year and a half, McCain would lose ground and set back the effort to reduce emissions because of a profound political miscalculation, his own stubbornness, and, most of all, his deep attachment to nuclear power.

About a year after their bill was defeated, McCain and Lieberman began drafting a new version. It was close to the original, but with one significant addition: billions of dollars in tax subsidies for the nuclear energy industry.

McCain had long been an advocate of nuclear power. “He feels strongly that nuclear power will be one of the keys to reducing emissions,” says Heather Wicke, who was his environmental legislative aide at the time. But environmentalists who had worked with McCain and Lieberman on the first bill were stunned. In one meeting, lobbyists for environmental groups attempted to persuade McCain not to attach nuclear subsidies to the legislation, arguing that doing so would weaken support for the bill. “He shook his finger at us and scolded us,” says one participant at the meeting, who recalls McCain saying, “You’re wrong and I’m right.” Wicke, now the director of policy for the Piedmont Environmental Council, notes that McCain had already made up his mind and that the session was “testy.”

In meetings with McCain’s staff, environmental lobbyists argued the obvious points, according to Karen Wayland, legislative director of the Natural Resources Defense Council: what to do with nuclear waste, the need to prevent nuclear proliferation, the problem with security at nuclear facilities. They noted that legislation restricting greenhouse emissions in and of itself would create a competitive advantage for nuclear energy companies. They made no headway, so the enviros appealed to Lieberman and his staff. “Lieberman didn’t seem to care for this provision,” one of the green lobbyists remembers, “but he needed McCain, and McCain was pushing hard” for the nuclear subsidies.

Part of McCain’s motivation was political. According to Wicke, he and his aides figured that these subsidies could attract several pro-nuclear Republicans, and they had their eyes on Senator Lindsey Graham of South Carolina and Senator Liddy Dole of North Carolina. Wicke was concerned at the time that the nuclear subsidies would cost the measure support and that a bill loaded with money for the nuclear energy industry would contradict McCain’s high-profile opposition to subsidies—which was partly responsible for his reputation as a fiscal conservative and a maverick. In June 2003, McCain had joined 47 other senators to vote for an amendment stripping an energy bill of up to $16 billion in subsidies for the nuclear power industry. (The amendment lost by a two-vote margin.)

Wicke heard from staffers for several senators who had supported McCain and Lieberman’s original bill that these senators might oppose the measure if the new version contained nuclear subsidies. “It made me nervous,” she recalls. But McCain remained firm in his belief that the billions for nuclear power would draw in more Republicans.

In May 2005, McCain and Lieberman reintroduced their climate change bill—with the subsidies. McCain acknowledged that “friends” in the environmental movement were opposed to the nuclear provision. He spoke at length in the Senate to defend this part of the bill: “The idea that nuclear power should play no role in our energy mix is an unsustainable position…. I, for one, believe it can and should play an even greater role, not because I have some inordinate love affair with splitting the atom, but for the very simple reason that we must support sustainable, zero-emission alternatives such as nuclear if we are serious about addressing the problem of global warming…. I am a green, and I entreat my friends in the movement to drop their wrongheaded objection to nuclear energy.”

His friends were not persuaded. While the Environmental Defense Fund and the National Wildlife Federation continued to support McCain, the Natural Resource Defense Council, the Sierra Club, the U.S. Public Interest Research Group, and others mounted a fierce campaign against the new bill. On June 22, 2005, it came up for a vote and was defeated 60 to 38. Several Democratic senators who had backed McCain’s original legislation—Russell Feingold (D-Wis.), Barbara Boxer (D-Calif.), Mark Dayton (D-Minn.), Tom Harkin (D-Iowa)—defected, and McCain picked up no new Republicans. (Senators Hillary Clinton and Barack Obama both voted for it.) “The staff didn’t fully appreciate how much opposition there would be to the nuclear provision,” Wicke says, adding, “I could say it was a bit of miscalculation…. It did stymie this climate change legislation.” After collecting 44 supporters for the first bill, McCain had lost ground.

Sometime after the vote, the NRDC’s Wayland attended a meeting McCain held with representatives of environmental organizations. McCain was unapologetic about his decision to tie his climate change measure to nuclear power subsidies. “He said that environmentalists had lost power and influence because they did not support nuclear power,” Wayland recalls, “and that renewables would never be more than 1 or 2 percent of the active energy supplies. I tried to argue with him and got nowhere. It was hard to a get a word in edgewise.” After the meeting an upset Wayland, engaging in retail therapy, headed to a store and bought several pairs of shoes.

In January 2007, McCain and Lieberman again introduced their climate change bill, and the nuclear subsidies remained in the bill. (Public Citizen estimated the subsidies would run to at least $3.7 billion.) But in fall of 2007, the McCain-Lieberman bill was eclipsed by legislation introduced by Lieberman and Republican Senator John Warner. This bill called for deeper cuts in greenhouse gas emissions—though not as great as many scientists advocated—and it contained no special subsidies for nuclear power. The Lieberman-Warner measure immediately became the major piece of pending climate change legislation in the Senate. McCain and his bill were essentially out of the picture. He was, at the time, busy campaigning for the Republican presidential nomination.

“To his credit, he was a leader in the Republican Party on climate change,” Wayland says. But by pushing breaks for nuclear power, McCain damaged a cause he had been passionately advocating for, leaving this particular battlefield with self-inflicted wounds.

Photo of John McCain at a December rally by flickr user marcn used under a Creative Commons license.