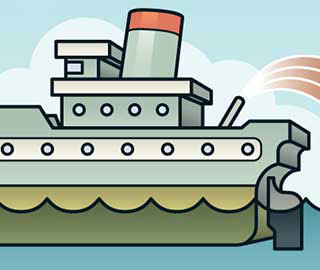 You might expect enviros to applaud the first large-scale test of an innovative method to combat global warming. But last spring, when Planktos Inc. announced it would seed the growth of CO2-sucking phytoplankton by sprinkling 100 tons of iron sulfate 350 miles off the Galapagos Islands, environmental groups went ballistic. The Natural Resources Defense Council and the World Wildlife Fund denounced the California firm. Friends of the Earth launched an email campaign. Greenpeace petitioned the UN’s International Maritime Organization to address the activity under its 1996 ocean-dumping accord. Sea Shepherd Conservation Society, a maverick operation that harasses whaling vessels, even threatened to intercept Planktos’ ship. In the end, the company had to cancel its expedition due to a lack of cash and outdated research gear. As the final indignity, its stock was de­listed by the Securities and Exchange Commission in December as punishment for late financial filings.

It was an inauspicious debut for iron fertilization, a carbon-sequestration scheme whose commercial boosters see in it the potential to reverse climate change and make money by selling carbon credits to polluting industries. Pioneered in the late 1980s by oceanographer John Martin, who once quipped, “Give me half a tanker of iron and I’ll give you an ice age,” the theory goes like this: Spiking the ocean surface with iron stimulates blooms of phytoplankton, a broad class of tiny organisms that thrive in iron-rich seawater and form the base of the marine food web. These photosynthetic powerhouses suck up CO2 and store it away in their tissues. Most are gobbled by other species, but—and here’s the contentious part—a significant portion decomposes and sinks to depths where currents may trap the carbon for a century or more. “The ocean is a very efficient pump with the potential to store millions of tons of CO2,” says Tony Michaels, director of the Wrigley Institute for Environmental Studies at the University of Southern California. “The big question is how much carbon, and for how long?”

Indeed, while researchers have engineered blooms in at least a dozen open-sea experiments, this basic question remains unanswered. “It’s just as likely that currents would carry the plankton back up to the surface, where they would release the CO2 back into the atmosphere,” says Penny Chisholm, an environmental studies professor at Massachusetts Institute of Technology. In addition, some computer models predict that iron fertilization could bring about the production of greenhouse gases such as nitrous oxide and methane. Other concerns: Seeding may stimulate growth of toxic species, alter the marine food chain, and lead to the depletion of deep-water oxygen. In short, toying with the world’s largest ecosystem would affect the natural balance upon which larger species, including humans, depend.

While many scientists share these concerns, the quickening pace of global warming seems to have tilted the debate away from the timid. Less than a year ago Kenneth Coale, director of California’s Moss Landing Marine Laboratories, told me that iron seeding was like “asking the ocean to become our trash can.” Profit potential, he fretted, could reframe the question “How does the ocean work?” into “How can we make the ocean work for us?”

But following a powwow of the field’s leading minds last September, Coale and others have softened their stance. “The freight train is running full speed over the cliff right now,” he now says, “and the issue is too important to leave any stone unturned in our search for solutions to climate change.”

Contributing to the change of heart is a new company that, unlike the secretive Planktos, has sought to woo marine scientists. San Francisco-based Climos is led by the mother-son team of Margaret Leinen, who left a post as assistant director of geosciences at the National Science Foundation, and Dan Whaley, an entrepreneur whose sale of travel website GetThere for $750 million provided seed money. Last October, the company proposed an international code of ethics to govern iron fertilization. It also has hired an outside company to assess its methodology and is recruiting renowned oceanographers to oversee its first project. “We’re committed to transparency because it’s the only way to build confidence that ocean fertilization is both safe and effective,” Leinen says.

But even for Climos the road to commercialization may prove long and costly. This January in Science magazine, 16 researchers (including Coale) identified daunting scientific hurdles and wrote that commercial projects should only move forward “if society is willing to acknowledge explicitly that it will result in the alteration of ocean ecosystems” with unknown consequences. Still, with Arctic ice disappearing at a rapid clip, many researchers believe we can no longer afford to be finicky. “It’s too late to prevent long-term environmental damage,” Michaels says, “so it’s going to come down to hard choices about what kinds of damage we can tolerate.” Whales vs. polar bears, anyone?