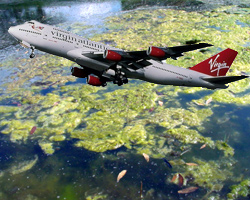 I wrote last month of Sir Richard Branson‘s conversion to the cause of environmentalism and his quest to develop a biofuel to power Virgin Atlantic’s fleet of commercial aircraft. The much-hyped test flight of a Boeing 747 between London and Amsterdam finally went off over the weekend. Despite widespread speculation as to the type of fuel to be used (more than 20 different feedstocks were considered, everything from canola oil to pond scum), the flight relied on a blend of oils extracted from Brazilian babassu nuts and coconuts to provide 20 percent of the test flight’s power.

Branson proclaimed the flight to be a resounding success and a huge step forward in cleaning up the world’s skies. “This pioneering flight will enable those of us who are serious about reducing our carbon emissions to go on developing the fuels of the future,” he said.

But, as Branson is learning, environmentalists are a tough crowd to please. Doug Parr, chief scientist at Greenpeace, called the Virgin Atlantic flight a “high-altitude greenwash,” saying that only the reduction of air traffic and a slowing of airport expansion will have a real impact on carbon emissions. Both, to put it mildly, are unlikely. Meanwhile, Kenneth Richter at Friends of the Earth labeled Branson’s test flight a “gimmick” and claimed that “biofuels do very little to reduce emissions.”

So that’s how we reward big business when it tries something new? I say cheer up, fellas! The truth is that aviation-related carbon emissions are a relatively tiny contributor to global greenhouse emissions, about two percent today and, at current growth, about three percent by 2050, according to the UN’s Intergovernmental Panel on Climate Change. The fact that Branson is even bothering to invest in cleaner fuels (not to mention cleaner-burning aircraft in the form of Boeing 787 Dreamliners) is something that merits encouragement, not derision. A publicity stunt? Maybe. Virgin is a corporation operating in a free market, after all. But if it’s a stunt, it’s one that at least promises to enliven debate about how we’ll power our world when the wells run dry.