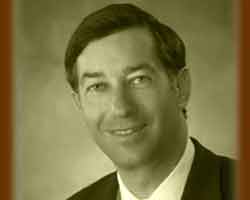 George Bush thinks trial lawyers are the root of all evil. He rails against them in speeches, campaigned against them as governor of Texas, and generally regards them as greedy extortionists out to wreck big business. Unless, of course, they work tirelessly to ban abortion, in which case, they are fit for a lifetime appointment to the federal judiciary.

On Feb. 12, the Senate will hold a confirmation hearing for several of Bush’s judicial nominees to the federal trial courts. Among them is Richard Honaker, a former Wyoming state legislator who led several efforts to abolish abortion in the state. He has a fairly long record of Bible-thumping and a very public disdain for separation of church and state. During his speech at the State Home School Convention in 2005, Honaker said, “We would like to see political liberty established in an Islamic country—Iraq—but the question is, how will political liberty sustain itself in the absence of a Judeo-Christian base?” For 15 years, Honaker also has served on the board of the Home School Legal Defense Association (HSLDA), which along with defending home-schooling parents from child abuse and neglect charges, has lobbied against gay marriage, sex education, and multicultural classroom material.

No surprise, then, that liberal legal groups, women’s organizations, and pro-choice activists have begun mounting opposition to Honaker’s nomination. “He believes the law should reflect Christianity,” says Simon Heller, legal director for the Alliance for Justice, a liberal activist group opposing Honaker’s nomination. “If you come in front of him and you’re not a Christian, I’m not sure that you’d get a fair shake in front of him.”

But in fact, Honaker’s red-meat social conservatism may be far less relevant to his fitness for the bench than his legal background, which liberal critics have largely ignored. Interestingly, if you look solely at his resume posted on the Justice Department’s website, you might actually suspect that Honaker’s a Democrat.

After graduating from Harvard in 1973, Honaker returned to Wyoming for law school and then went to work for the state attorney general and later, became the state public defender (not exactly right-wing terrain). After several years supervising lawyers for indigent criminals, Honaker went into private practice, where he has spent the bulk of his career racking up multi-million dollar personal injury settlements (reminiscent of prominent Democrat John Edwards). He even did a stint as president of the Wyoming Trial Lawyers Association, a state chapter of a national association that Republicans consider to be the Death Star because of its lobbying muscle and huge contributions to Democratic causes and candidates.

Honaker’s website boasts that the lawyer won an $8.6 million settlement for a man who lost both his legs in a catastrophic railroad accident, the largest of its sort in the country, ever. Current cases include suits against oil and gas companies on behalf of workers injured on drilling rigs, class actions over dangerous prescription drugs, and many garden variety negligence suits against nursing homes and the makers of other dangerous products. As the president of the Wyoming bar association, Honaker even wrote an article for the Wyoming Lawyer opposing restrictions on medical malpractice lawsuits in 2003. He is, in short, precisely the kind of lawyer that Republicans love to hate.

That’s why, despite his stance on abortion and sex ed, it’s entirely possible that the average Jane would be much better off appearing before Judge Honaker than before most of Bush’s other nominees. Many of Bush’s appointees cut their teeth in corporate defense law and as judges they can’t get plaintiffs out of their courtrooms fast enough. (And of course, they all oppose abortion and gay marriage, too.) Their rulings have made the federal courts increasingly hostile territory for the type of people Honaker has represented. His long history of fighting for the little guy suggests a Western populist streak that may transcend his recent membership in the right-wing Federalist Society.

Indeed, conservative Christian plaintiff lawyers like Honaker have much in common with liberals once they get beyond religious hot-button issues like abortion. After all, the Bible does say, “Do not deny justice to your poor people in their lawsuits” (Exodus 23:6). During the Terri Schiavo case in Florida, a Virginia trial lawyer who sues nursing homes for a living named Ken Connor represented former governor Jeb Bush. Last year, Connor testified in favor of a congressional bill sponsored by Democrats to ban the use of mandatory binding arbitration clauses in consumer and employment contracts, a bill backed by Public Citizen, a consumer group founded by Ralph Nader.

Further, a U.S. District Court in Wyoming is going to see a lot more tort cases than school-prayer litigation. A quick search of the court docket shows that since January 2004, the court has seen nearly 300 personal-injury cases. The number of constitutional challenges to state statutes? Zero.

Honaker himself has made this point to pro-choice groups in response to their criticism of his nomination. Last March, he sent a letter to the executive director of NARAL Pro-Choice Wyoming trying to reassure her that if confirmed, he would “faithfully apply the precedent of the United States Supreme Court and the Tenth Circuit” when it comes to abortion, and that “it is unlikely that any case involving the abortion issue would ever come before the United States District Court in Wyoming.” Even if it did, he wrote, “on such a controversial subject, the losing party would appeal to the Tenth Circuit, and perhaps on to the United States Supreme Court, and nobody would remember what the trial judge did anyhow.”

While perhaps a bit unvarnished, Honaker’s comments show that he has a pretty solid understanding of the role of a federal trial court judge. But his frankness didn’t help his cause. Judith Schaeffer, legal director for People for the American Way, quoted the letter with some outrage in her letter of opposition to Honaker’s nomination to the Senate Judiciary Committee.

Ignoring Honaker’s legal record to focus on religion may be a strategic mistake for women’s groups seeking to derail his nomination, as they have clearly missed a prime opportunity to enlist a very powerful ally in the fight: corporate America. Business groups don’t care about abortion, but they do care about class actions, one area that federal trial judges have a great deal of discretion over. Big business has spent years and millions of dollars attacking lawyers like Honaker and trying to keep them and their clients out of court. It’s hard to imagine they’d be thrilled to see him win a lifetime appointment to the federal bench. But, their Washington lobbying groups weren’t paying attention when Honaker was nominated. So far, they haven’t raised a peep against Honaker. (Calls for comment to the U.S. Chamber of Commerce’s Institute for Legal Reform and the National Association of Manufacturers went unreturned.)

Victor Schwartz, general counsel for the American Tort Reform Association, comprised of lots of Fortune 500 companies trying to restrict Americans’ access to the courts, says he was unaware of Honaker’s nomination, and was puzzled that no one in D.C. was buzzing about it. “If they put Mark Lanier up for a federal judgeship, I’d hear about it,” he says, referring to the famous Texas trial lawyer who recently won a $250 million verdict in a Vioxx lawsuit and who, like Honaker, is also a conservative Christian Republican.

Ted Frank, the director of the conservative American Enterprise Institute Legal Center for the Public Interest and a former defense attorney who tracks such things, seemed genuinely surprised to hear about Honaker’s background. “Given that Congress has been so slow to fill open seats,” he said, “it seems surprising that the president is spending political capital on the judicial nomination of [a national trial lawyer association] member, given how hard that special-interest lobbying group has worked to try to block the president’s reform agenda.”

Frank suspects that Honaker slipped through the nomination process because the White House simply deferred to the senators from Wyoming, who are both Republicans, for a referral. He did say, though, that Honaker’s trial lawyer status might explain why Democrats on the Judiciary Committee were willing to put him on the hearing calendar, despite the opposition from women’s groups. “Certainly when faced with the choice between selling out trial lawyers and selling out feminists, they always sell out feminists,” Frank said.

Schwartz says business groups might not automatically oppose Honaker just because he’s a trial lawyer. It all depends on Honaker’s temperament and how committed he is to following the law, says Schwartz, who finds the liberal groups’ opposition to him rather amusing. “The Supreme Court has laid down the law on abortion. District court judges have no power to change that,” Schwartz says. Opposing a judge because of his views on abortion, he says, “would be like objecting to a painter because he opposes Roe v. Wade. What matters is whether he can paint a wall.”

But the Alliance for Justice’s Heller says his group’s objections to Honaker go beyond abortion and directly to his ability to follow the law. “What if someone is dismissed from their job for being gay? What if someone sues because their health insurance doesn’t cover contraception?” he asks. Those are exactly the sorts of cases that might come before Honaker, he says, and Heller thinks Honaker’s religious views would make it impossible for him to give such people a fair hearing, whether or not he was a plaintiff lawyer. “It’s not just about abortion. He’s on the extreme fringe,” Heller says. “Could you have someone worse? Yes. That doesn’t mean he should be confirmed.”