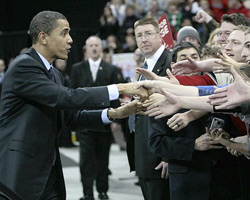 “It is so wonderful to be here.” So declared Hillary Clinton in El Paso, Texas, on Tuesday evening, as vote results being tallied in Virginia, Maryland, and the District of Columbia showed she was being clobbered by Barack Obama. But worse for Clinton was that she was losing another clump of post-Super Tuesday primaries by large margins (51 points in D.C., 29 points in Virginia, 23 points in Maryland) because her base voters were abandoning her. The message of the night: Clinton should be scared. And perhaps John McCain should be, too.

Obama won the Potomac Primaries by eating into Clinton’s core. In the Super Tuesday states, Obama won 43 percent of women. He took 55 percent in Maryland and 60 percent in Virginia. In the Super Tuesday states, Obama was supported by only 35 percent of voters over 65 years of age. In Maryland and Virginia, a touch more than 50 percent voted for him.

Within all the Democratic constituencies Clinton relies upon, Obama not only made gains, but won. He won among voters making less than $50,000 a year. He beat her among those with no college degrees. He won Latinos. He won Catholics. He won white men by a substantial margin. And Obama triumphed in every part of that state: urban, suburban and rural. Of the subdivided demographic groups, only white women stood with Clinton tonight. The rest of her base—at least in these states—collapsed.

So far, the Democratic primary contest has not been a race of momentum; wins have been followed by losses, and vice versa. Tuesday marked the first time any candidate has placed first three election nights in a row. Obama won Washington, Louisiana, and Nebraska on Saturday, Maine on Sunday, and then the Potomac contests. This is the first Democratic streak of the year. And it comes as Obama has opened up a fundraising advantage over Clinton and the Clinton camp has been hit with organizational confusion . After demoting her campaign manager on Sunday, Clinton said good-bye to her deputy campaign manager just as the Potomac voting was finishing up. The end result is what the Obama campaign says is a 124-delegate lead in pledged delegates.

Prior to the Potomac contests, there was talk that Clinton could be competitive in Virginia and she devoted several precious campaign days to working the state. She didn’t come close. Obama pocketed almost two-thirds of the Democratic electorate in Virginia. More important, he collected over 610,000 votes. That was about 160,000 more than all of the votes for the three Republican candidates in the state. Democrats have been eying Virginia as a pick-up state for several years. Obama’s performance there suggests he could mount a serious challenge to John McCain, who also won in Virginia, Maryland and the District of Columbia. And if a Democrat can hold on to all the states where John Kerry placed first in 2004 and win over Virginia, that candidate would need to flip only one other state to bag a majority of the electoral college votes. Possibilities? Colorado, New Mexico, Iowa, and Nevada. (Of course, winning Ohio plus all the Kerry states would also work.)

During a victory celebration in Wisconsin—which holds a primary next Tuesday, as does Hawaii, where Obama grew up—Obama spoke like a front-runner looking ahead to the general election. He barely referred to Clinton. Instead, he zeroed in on McCain, the likely Republican nominee. McCain’s “priorities don’t address the real problems of the American people,” Obama declared, “because they are bound to the failed policies of the past. George Bush won’t be on the ballot this November, but his war and his tax cuts for the wealthy will. When I am the nominee, I will offer a clear choice.” Moments later, McCain fired back, playing the POW card: “Hope, my friends, is a powerful thing. I can attest to that better than many, for I have seen men’s hopes tested in hard and cruel ways that few will ever experience…. To encourage a country with only rhetoric rather than sound and proven ideas that trust in the strength and courage of free people is not a promise of hope. It is a platitude.” For Obama, McCain represents the politics of the past. For McCain, Obama offers the politics of the trite. And for a moment, Clinton was out of the picture.

Clinton has the time and opportunity to regain control of the Democratic race. With her campaign aides expecting her to lose Wisconsin and Hawaii next week, she and they are looking to strike back in the delegate-rich states of Ohio and Texas on March 4. Hence, her quick retreat from the East Coast to the Lone Star State. But it certainly is tough for a candidate to go so long without a win. Ask Rudy Giuliani.

In Wisconsin, Obama proclaimed, “We have now won East and West, North and South and across the heartland of this country.” He could have added, “We won young and old, male and female, urban and rural.” It’s not just the vote totals that should worry Clinton; it’s the all-important breakdown. Clinton’s plan is to stop Obama in Ohio and Texas. But are Democratic voters there so different from those in Virginia? She better hope so.