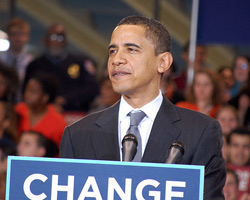 Hillary Clinton’s historic presidential campaign–once the political handicappers’ favorite in the Democratic contest–now appears to depend on two things: Ohio and Texas.

On Tuesday, Barack Obama racked up his ninth win in a row, defeating Clinton by an embarrassing 17 points in Wisconsin. And once again, the nature of his win made the night worse for the Clinton crowd. As Obama had done in Virginia and Maryland a week earlier, he outdrew Clinton in voters in most demographic slices. In a state full of working-class voters, Obama demonstrated once more that he can appeal to lunch-bucket Democrats, outpacing Clinton among voters making $50,000 or less a year. Among voters below 30 years of age, Obama walloped Clinton 73 to 20 percent. He had a 2-to-1 edge with independents and Republicans who voted in the Democratic primary. Clinton did have an edge among those 65 and older: 60 to 39 percent. But among voters who said the economy was the top issue, Obama pulled 55 percent–a big gain from the 44 percent he collected among these voters on Super Tuesday. In Wisconsin, he won 54 percent of the vote of Democrats who have not attended college–presumably blue-collar Dems. On Super Tuesday, he collected only 42 percent within this group.

At this point, Clinton’s base seems to be composed of one group of loyalists: older, middle-income women. (Among all Democratic women, Obama beat Clinton 50 to 49 percent in the exit polls.) Though women voters propelled Clinton to victories in New Hampshire and Nevada, they have not carried her to success since those two states. At the same time, Obama has expanded his core.

In Wisconsin, Obama’s win occurred after another nasty stretch of campaigning. The Clinton campaign, after easing up on the attacks following the South Carolina contest, went into kitchen sink mode: throwing whatever they could at Obama. The Clinton crew accused him of plagiarism (for having used a few sentences of political rhetoric close to that of Massachusetts Governor Deval Patrick, an Obama supporter), claimed his health care plan was a disaster, slammed him for considering whether to break his promise to stay within the public campaign financing system (which Clinton, too, has pondered rejecting), maintained that his mortgage crisis plan was inadequate and (in the words of one Clinton spokesperson) “to the right of George Bush,” and pounded him for turning down her request for a debate a week. None of this worked.

According to the exit polls, Democratic voters who reached a decision on how to vote within the past month broke for Obama 62 to 37 percent. Those who decided over a month ago split 50 to 49 percent for Clinton. The obvious conclusion: Obama has, yes, momentum. Winning eight contests in a row prior to Wisconsin influenced Badger State voters. Two-thirds of Wisconsin Democrats told exit polltakers they believed Obama has the better shot at winning in November.

With her support cratering, what can Clinton do? None of the trendlines are positive for her, as she heads toward the March 4 showdowns in Ohio and Texas. In the Lone Star State, Clinton has a lead in the polls, but it has been narrowing in recent days. In Ohio, she seems to be maintaining a comfortable advantage. But are Democratic voters in these states–including those working-class Democrats Clinton is counting on in Ohio–a different breed than those in Wisconsin and Virginia and immune to Obama’s appeal? The next two weeks, he will be working these states hard. And so far this year, every time Obama has had a chance to spend much time and resources in a state, he has won or placed a close second.

A week ago, Mark Penn, Clinton’s chief strategist, sent out a memo to reporters, noting that after Ohio and Texas, Clinton and Obama “will be virtually tied” in delegates. He wrote,

The reason Hillary is so strong in Ohio, Texas and Pennsylvania is that her message of delivering solutions resonates strongly with voters in those states. Hillary is the only candidate who can deliver the economic change voters want–the only candidate with a real plan and a record of fighting for health care, housing, job creation and protecting Social Security.

In recent primaries, Democratic voters have not validated Penn’s claim. Still, he argued that Clinton could triumph in Ohio and Texas (and Pennsylvania on April 22, too) with the votes of white women and Latinos and end up with a lead in delegates. That may be possible–though the math has become rather difficult for Clinton. With the loss in Wisconsin (and the expected loss in Hawaii on the same night), Clinton more than before needs to score not only wins but blowouts in Ohio and Texas to close the increasing gap between her and Obama in pledged delegates. And there’s no obvious course of action for her. She bashed Obama in Wisconsin to little effect. She also adopted a more populist, give-’em-hell tone when discussing economic issues, and there was no payoff.

In Youngstown, Ohio, on Election Night, Clinton–in a marathon-length speech drenched with policy details–repeated her chief criticism of Obama: I’m experienced; he’s not. The Democratic race, she declared was about selecting a presidential candidate who “relies not just on words but on hard work.” She added, “We can’t just have speeches, we have to have solutions….While words matter, the best words in the world are not enough unless you match them with action.”

That experience-over-inspiration argument has been Clinton’s pitch since Iowa and New Hampshire, and it has not yet stopped Obama. Can Clinton play the same game of hold ’em in Texas and Ohio–her last best chances–and expect different results? There’s no knowing at this point. But the betting is no longer in her favor.