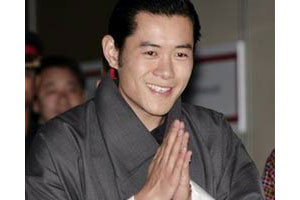 The fifth dragon king of Bhutan looks good on the royal lawn-dart field. Tall and broad shouldered, with slick black hair, he stands against the distant surrounding Himalayas in a traditional gray robelike gho holding a Heineken in one hand and a large metal dart in the other. It’s the lunar New Year, and a small crowd of soldiers and civil-service workers are gathered for a celebratory game. The king squints. He lunges and hurls the projectile through the crisp breeze, scoring a point for his team before cutting the match short and getting back to work.

Twenty-eight-year-old Jigme Khesar Namgyal Wangchuck is, besides an old Massachusetts-boarding-school buddy of one of the authors, the world’s youngest head of state. When we visited him last month, he was organizing and enacting wildly ambitious designs for his country’s future. Nestled between China and India, the tiny nation is hard to get to (it’s accessed by exactly one government airline, which counts among its fleet exactly two planes) and harder to get into, with the visa process lengthy and the compulsory tourist tariff high (about $200 a day). Its remoteness and seclusion—tourists weren’t allowed in until the ’70s, and television and Internet less than a decade ago—have kept its customs and principles, such as promoting Gross National Happiness over Gross National Product, intact. Since his father abdicated the throne to him in December 2006, Jigme has been putting into action what his father put into plan: trying to figure out how to retain his culture’s uniqueness while simultaneously leading Bhutan into unprecedented participation in contemporary politics and economics.

Jigme is the great-great-grandson of Ugyen Wangchuck, the first monarch of Bhutan, who was elected to power by the citizens of Bhutan’s then-capital city. For most of the 20th century the Wangchuck dynasty protected its nation’s sovereignty through isolationism, resigning its foreign affairs to the colonial British powers in India (rather than being colonized) and then India itself after 1947. Subsistence farming provided for the people of Bhutan, as it still does for most today, and international trade was all but nonexistent. But with globalization and neighbors like Bhutan’s, even the most withdrawn country couldn’t stay secluded forever.

Jigme’s father, who was also once the world’s youngest head of state, when he ascended the throne at 16, wanted his son to have the best of both worlds: grounding in Bhutan, a childhood enabling a deep understanding of the kingdom’s culture and history, but also time and an education in the Western world. After high school and Wheaton College in the United States, Jigme went on to get his master’s of philosophy in politics from Oxford University before moving to New Delhi. There, he spent a year at the National Defence College studying with prominent military figures, Ph.D.s, and other international leaders, among whom he was the youngest student by far.

The king indeed sounded fresh and idealistic, but also fully capable and wise, when he described his passion for democracy over tea. In January, Bhutan held its second of two regional elections for the upper house of the new Parliament, and His Majesty was proud when he told us that more than 50 percent of eligible voters turned out. The king feels that the system of democracy is no good if the people haven’t embraced the mindset, one that can’t be forced, but has to come about gradually. He understands (as some international news outlets reported after last week’s first-ever national elections) that some citizens are wary of the change, but believes that with a better understanding of the empowering process, the people of Bhutan will embrace their right to vote. As we sat on the grounds surrounding Tashichhodzong, the fortress that serves as the government seat, in a pavilion swathed in bright yellow fabric, Jigme explained the extraordinary measures the government was taking to encourage fair and wide participation among his subjects: posters all over the countryside explaining “Fair Play Politics” and “Things to Remember on Poll Day,” and urging the importance of participation by everyone in the democratic process; electronic voting machines delivered to remote locations by helicopter; and observers from inside, outside, the EU, the UN. The government also enacted laws requiring employers to give time off on election day and gave daily cash allowances for voters from some far-off villages “to compensate for the minimum number of days required for them to travel to and from” voting stations. The millions in efforts Bhutan pumped into the election ultimately paid off; 80% of the electorate cast votes last week.

Every Bhutanese citizen over the age of 18 has the right to vote, except Jigme. (When we asked him if he could vote, he laughed and said, “No.”) And though the country has had only kings, and no ruling queens, the gender divide doesn’t extend to running for public office. “We thought a long time about the requirements,” Jigme told us. “And we decided the condition should be a college degree.” And while having female Parliament members may not seem incredibly progressive to Westerners, these changes are huge steps for a country that, for example, just abolished serfdom in the 1950s.

Bhutan’s economy is one of the smallest in the world, but it’s also getting bigger. Though a large portion of its international trade revenue comes from exporting hydroelectric power to India, tourism is also a big moneymaker, and the country is working to expand it. This year, an officer in the Ministry of Economic Affairs says, more tourists have applied for visas than ever before. With foreign interest in Bhutan growing, hotel construction is rampant in the capital, Thimphu, and other areas around the county, and the Department of Tourism is expanding in order to meet the demands of the coming years. But the government is still careful to protect its precious cultural and environmental resources: 51 percent of every business venture must be owned by a Bhutanese, and the new constitution states that a minimum of 60 percent of the whole country must remain forested.

And both embodying and leading this integration of modernity and respect for tradition is Jigme, whose handsome face adorns wall posters and lapel buttons countrywide, who developed an international fan base as “Prince Charming” after a diplomatic visit to Thailand, whose strong, soft voice carries the accent of many countries. “Look at these stars,” he said to us as we were leaving his home late one night. We all craned our necks back to see the mess of tiny lights in the dark mountain sky. “You can’t get stars like this anywhere else.” Unlike most Bhutanese, he would know. And though he was bragging about the spectacle a bit, he was also enamored with it. Bhutan has long been known for its enduring natural beauty. Now its social, political, and economic landscape are worth watching as well. Its monarch is bestowing—even forcing—increased financial and democratic opportunities on his people. But even accomplishing that “doesn’t mean that the people will be happier,” Jigme told us. “They are happy now. The challenge is to find the balance.”