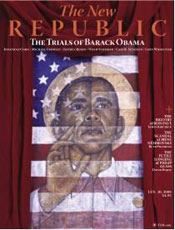 Barack Obama has a messiah complex and no one will convince me otherwise.

You can find the prepared version of last night’s victory speech here, and you can video of his delivery here. Comparing the two reveals that Obama improvises quite a bit, and does so impressively. But what he improvises is some awfully heady, almost messianic, stuff.

Here’s a lengthy improvised section that I transcribed off the video. It’s gorgeous, especially when you hear the crowd respond to it. But Obama puts himself in some exclusive company.

Nothing worthwhile in this country has ever happened unless somebody, somewhere is willing to hope. Somebody is willing to stand up.

Somebody who is willing to stand up when they are told “No you can’t” and instead they say, “Yes we can.”

That’s how this country was founded. A group of patriots declaring independence against a mighty British empire—nobody gave them a chance—but they said, “Yes we can.” That’s how slaves and abolitionists resisted that wicked system, and how a new president charted a course to ensure we would not remain half slave and half free.

That’s how the greatest generation—my grandfather fighting in Patton’s Army, my grandmother staying at home with a baby and still working on a Bomber assembly line—how that greatest generation overcame Hitler and fascism, and also lifted themselves up out of a Great Depression.

That’s how pioneers went West when people told them it was dangerous, they said, “Yes we can.” That’s how immigrants traveled from distant shores when people said their fates would be uncertain, “Yes we can.” That’s how women won the right to vote, how workers won the right to organize, how young people like you traveled down South to march and sit in and go to jail, and some were beaten and some died for freedom’s cause. That’s what hope is. That’s what hope is.

That’s what hope is, Madison.

That moment when we shed our fears and our doubts. When we don’t settle for what the cynics tell us we have to accept. Because cynicism is a sorry sort of wisdom. When we instead join arm in arm and decide we are going to remake this country, block by block, precinct by precinct, county by county, state by state. That’s what hope is.

There’s a moment in the life of every generation, when that spirit has to come through if we are to make our mark on history. And this is our moment. This is our time.

This is our moment to do what? To march? To organize? No. To vote for Obama. As if simply by voting for one man, we make a mark upon this country as indelibly as those who fought the Nazis or sat at lunch counters.

But the easiness of Obama’s movement isn’t what bothers me most. I am profoundly troubled that any candidate would chart the course of American history as follows (and I’m rearranging Obama’s history here to make it more chronological):

Does this post play unhelpfully into the pernicious and growing Obamaism-as-cult meme that we’ll likely see repeated over and over by the right wing if Obama gets the nomination? It does. Sorry. But Obama’s rhetoric makes an undeniable suggestion: that his election, not an eight-year administration that successfully implements his vision for America, would represent a moment in America of the grandest, most transformative kind. And that’s a bit much.