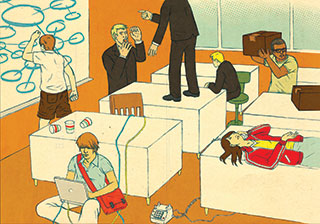 last october, Rep. Frank Wolf wrote the White House with a radical proposal to promote “environmental stewardship, family values and energy independence.” In asking President Bush to designate a National Telework Week, the Virginia Republican evoked the promise of a nation without two-hour commutes, veal-pen cubicles, petty workplace politics, or disgusting communal coffeepots. “Wouldn’t it be great,” he wrote, “if we could replace the evening rush hour commute with time spent with the family, or coaching little league or other important quality of life matters?”

Yeah, that would be great. Trouble is, when your home is your office, the boundaries between work and personal time dissolve. Distractions (cable, fridge, couch) lurk everywhere. But the biggest problem is social: Without the companionship of office mates—even the Dwight Schrutes of the world—telecommuters and freelancers can feel unmotivated and lonely. Which may explain why the virtual office remains largely hype. The telecommuting lobby claims that 100 million Americans will work remotely by 2010. But in 2004, only 13.7 million did. Of those, only 2 million were working full-time from home.

As shocking as it may sound, we may actually need the office, despite its reputation as a soul-sucking pit of conformity and monotony. In a recent analysis of 40 years of research, Stephen Humphrey, a professor of management at Florida State University’s business school, found a strong correlation between the level of social interaction at work and job satisfaction and productivity. He also found that this correlation has strengthened over time—that now more than ever, the office has become a refuge of sorts. “It used to be that everyone could hang out around the watercooler—now we telecommute or spend two hours in our cars on the way to work,” he says. “We suddenly start to realize, we miss socializing—and we need it.”

So what is the lonesome office-less worker to do? In 2005, Brad Neuberg, a software programmer in San Francisco, hit upon a simple solution: He got a few friends together to share a rental space, as well as printers, fax machines, and wireless Internet, and—like a good start-up founder—branded his creation “coworking.” As the 31-year-old recalls, “I said, ‘Why can’t I have my cake and eat it too? Is there a way that I can have community and independence?’ It’s a false assumption that you can’t have both.”

Word of Neuberg’s San Francisco Coworking Space spread, and techies, writers, and entrepreneurs began dropping in. “I urged people to steal the idea,” he says. Today, there are 29 coworking sites across North America and a few more around the globe—all listed on a wiki that has instructions for anyone who wants to start her own. (The concept isn’t clear to everyone. In response to a 70-year-old who posted a call for “someone who enjoys dancin’, dinin’ and lovin’,” a wiki user wrote, “We appreciate your interest in coworking, but keep in mind that it’s not to be confused with ‘cohabitating’.”)

Your electronics and appliances are programmed with default modes that use up more power than they need to. A few quick fixes to stretch your dollars, energy, and your gadgets’ lives a little further:

Prints of Darkness
Most desktop printers are set to print in Normal (read: heavy) ink mode and in color, eating up ink cartridges.
Solution: Go to Printer Settings and choose Draft (or FastDraft) and Grayscale modes.

Word Games
Microsoft Word’s side margins are set at 1.25 inches, and the printing default is single sided.
Solution: Go to Page Setup > Margins, and set to one inch or less. If possible, print on both sides.

Not So Bright
The default screen setting for new Macs is super bright, prompting one MacWorld blogger to complain that he had to “break out the welder’s helmet.”
Solution: Adjust brightness in System Preferences > Displays. Or tweak your screen with free software such as Splasm Software’s Brightness Control or VersionTracker’s Gamma Control.

Trailer Trash
Pop in a DVD and you’re sent straight to previews.
Solution: Press the Menu button on your remote control. Some dvds will let you skip ahead; others, mysteriously, will not.

The Heat Is On
Dishwashers’ normal wash settings usually default to heated dry, though cold air works just as well.
Solution: Most new dishwashers have a non-heated dry option. For older ones, set a short time dry, or let your dishes air-dry overnight.
—Elizabeth Gettelman

Of course, coworking isn’t a new idea: Chronically broke creative types have long gathered to work in collectives and retreats. But the current crop of coworking enthusiasts has updated the concept with an aesthetic that’s more Silicon Valley than salon. They refer to the “four pillars of coworking”—openness, community, sustainability, and most important, collaboration. They even have a term for the spontaneous networking and teamwork that their new coworkers provide: “accelerated serendipity.”

At the Hat Factory, a coworking site housed inside an old San Francisco manufacturing plant, a velvet Elvis keeps watch over a communal work table and a living-room area with beat-up couches, an Xbox, and Caddyshack on video. Some coworking enthusiasts are thinking more ambitiously. Alex Lavidge, a 28-year-old self-described “entrepreneur for the people” who trademarked the phrase “Life Is a Business,” is setting up a space in San Francisco called Altrupreneur Center, which he hopes will blur the lines between work, home, and social life—like a residence hall for freelancers and independent contractors. “The dream is a hostel space on top, a coworking space underneath, and a cafeteria down below,” he says.

Citizen Space, one of San Francisco’s busiest coworking spaces, has claimed the middle ground between crash pad and dot-com dream dorm. Tucked away on the third floor of an unpretentious downtown building, Citizen Space is a large room with seven desks for regular tenants (a desk costs $350 a month) and a big table in the back for part-timers and drop-ins, who can hang out free of charge. Music plays at a low volume. The walls are painted a cheerful light green; one is adorned with a mock inspirational poster of a marine mammal with the caption, “Find your higher porpoise.” The feel is low-key yet professional. “We want it to be somewhere our tenants can meet with clients,” says cofounder Tara Hunt, a 34-year-old marketing consultant. In other words, no foosball.

When I arrived at Citizen Space one morning around 10, ready to get to work, the place was nearly dead. Slowly, my colleagues for the day began to trickle in. Between quietly typing on their laptops, they spoke about the annoyances of working alone. “If you have clients at home, your cat might sit on their laps every five minutes,” one told me. Occasionally, there’d be a moment of accelerated serendipity, such as when someone said he needed a web designer and Citizen Space cofounder Chris Messina said he knew just the right person for the job.

I wanted my share of spontaneous collaboration, too, so I announced that I had to brainstorm story ideas. I braced for a roomful of annoyed glares, but my fellow coworkers stopped what they were doing and began playfully tossing suggestions my way—as if it were a game, not work. It was very unofficelike, in a good way.

I left around six—making me one of the last to punch out. Flexible hours and accelerated serendipity aside, I could see coworking’s appeal as a way to create an office that’s as much about sociability as productivity. The virtual-office evangelists may not buy that. “There is nothing magical about strapping ourselves into a car and driving sometimes up to an hour and a half, arriving at a workplace and sitting before a computer,” Rep. Wolf wrote in his letter to the president. “We can access the same information from a computer in our living rooms.” That’s true, but sometimes the least important thing about going to work is, well, work.

Worker drone: Put on Thriving Office and feel the relaxation just melt away.

Bring the Noise Say goodbye to the sounds of silence with the Thriving Office CD. Two tracks—”Busy” and “Very Busy”—offer a variety of office background noises, including ringing phones and whirring computers. thrivingoffice.com

I’ll Fake Manhattan For $275 a month, World-Wide Business Centres will give you a fancy Madison Avenue proxy address and a New York City phone number that connects directly to your cell phone. wwbcn.com

Yard Work If your living room is not an ideal place to seal the deal, try the Ultimate Backyard Home Office. For $15,999 you can build a professional-looking one-room office—complete with a wooden deck for power naps—steps away from your house. cedarshed.com

Take This Job… Send your grunt work to a virtual assistant at the Bangalore-based Brickwork India at the end of the day, and your to-do list will be checked off by the time you wake up. Rates start at $15 an hour; a 40-slide presentation costs $500. b2kcorp.com

Surf Patrol With Net Monitor software, your boss can track your web surfing, emails, and even log you off your laptop if you misbehave. All for just $59. networklookout.com
—K.B.