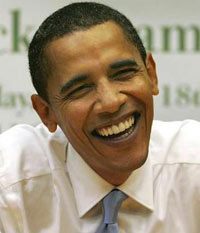 According to the National Journal‘s nonpartisan ratings, released today, Barack Obama was the most liberal member of the Senate in 2007. This raises a number of issues for the senator from Illinois.

First of all, we should point out that the numbers are ridiculous. According to the NJ press release, “Obama voted the liberal position on 65 of the 66 votes in which he participated, while Clinton voted the liberal position on 77 of 82 votes.” So he took the liberal position less frequently than Clinton did, and less frequently than a number of senators. But because he was out campaigning, he only returned for big, divisive votes where the Democratic Party needed him. He only cast one vote against the liberal position, meaning he was usually content to skip votes where he would be voting against his party. As B.B. points out, “a senator who takes the ‘liberal’ position 95 times out of 100 is somehow less liberal than his colleague who takes the liberal position 48 times out of 50.” In years past, when Obama voted as many times as a normal senator, he was the 10th and 16th most liberal senator. That is likely a truer representation of his politics. Does anyone really think Obama and Joe Biden are more liberal than Russ Feingold or Bernie Sanders (a socialist)?

And let’s not forget that John Kerry was identified by the National Journal as the most liberal senator of 2003 just as Kerry was wrapping up the Democratic nomination. (Probably because he missed votes due of campaigning, as Obama is doing now.) Not a bad system for publicity, huh?

But regardless of how legitimate the numbers are, Obama has now been tagged. Will Hillary Clinton use it against him? That would be awfully low—first, she’s just as liberal as he is, and second, a Democrat should never try to sink another Democrat by using right-wing talking points about the “L word.” But John McCain or Mitt Romney will use this against Obama, assuming Obama is the nominee. How does he respond?

He can say, “You know what? After eight years of sheer horror, we need someone with an ideology as far from President Bush’s as possible. The more liberal the better!” That might warm some hearts around here. But Obama may not want to undertake a project to rehabilitate the “liberal” image in the middle of his presidential campaign. But he can’t throw liberals under the bus, either, because there are an awful lot of committed lefties who are going to vote in the remaining Democratic primaries.

It’s a tough position to be in. In all likelihood he’ll say something like, “My campaign is about moving past these labels that seek to put our politics into small boxes.”

But regardless of whether or not Obama is the most liberal senator, and regardless of his choice of response, let’s make one thing clear. Obama is not a centrist. He was never centrist. He is a uniter. He does reach across the aisle. But he always do so in pursuit of progressive ends. That’s why Obama’s presidency has greater upside (to borrow a sports term) than Hillary Clinton’s. If it does everything Obama promises it will (no sure thing), it will transform the Democratic Party the way Reagan transformed the Republican Party, and get millions of new people behind progressive goals. (It could also get stuck in neutral by a President Obama’s desperate need to seek out common ground with an unwilling Republican opposition in Congress.)

And PS — This line from the NJ press release is awesome: “Republican presidential candidate John McCain did not participate in enough roll calls to receive a composite score.”