I knew there was something afoot for Barack Obama about half an hour into the caucus I attended at Merrill Middle School in Des Moines, Iowa. First of all, there was the turnout. Democratic Precinct 72 had roughly 25 attendees in the 2004 caucus, according to precinct chair Louise Alcorn. Today, it had 58. And even though the caucus represented a union-heavy neighborhood, which one might expect to turn out for John Edwards, the first count of the night identified 24 Obama supporters, 16 Edwards supporters, and just 12 Hillary Clinton supporters. The caucus also included one Biden supporter, four Richardson supporters, and one undecided voter, all of whom later spread evenly to the larger groups.

The relatively small precinct only had two delegates to give, so the Clinton, Obama, and Edwards groups all tried convincing each other that they ought to switch camps. Though the Edwards supporters in attendance were well-prepared (they had pies and candy available for converts) and committed (they gave passionate speeches advocating for Edwards), the Obama supporters sat steadfast and quiet. 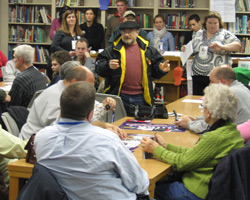 After some heated moments, including a long discussion of whether Elizabeth Edwards’ cancer necessarily meant she would die while her husband was in office, the final count showed that Obama had actually grown in strength. Obama 25, Edwards 22, and Clinton 11—Obama and Edwards each took home one of the precinct’s two delegates.

By the time the caucus wrapped, it was becoming clear that Thursday was Obama’s night. Anecdotal reports suggested that turnout was way up—the eventual turnout number would shatter all records—a fact that favored Obama significantly because it meant first-time caucus-goers, independents, and young voters were turning out big time. Indeed, young voters in particular might be the story of the Iowa caucuses: notoriously hesitant to participate, they composed over 50 percent of Obama’s support. News reports even indicated that Obama had beaten Clinton among women.

The final results—Obama 38 percent, Edwards 30 percent, Clinton 29 percent—suggested that Iowans had responded to Obama’s call for decreased partisanship and a renewed politics that left special interests and lobbyists behind. In fact, they had answered it so fervently, and in such large numbers, that they had bested the best political machine in politics by nine points. In his victory speech at the Hy-Vee Hall in Des Moines, where supporters hugged, cried, and hooted randomly, a grinning Obama struck almost grandiose tones.

He called the victory a “defining moment in history,” one that proved that “in the face of impossible odds, people who love this country can change it.” Was Obama buying into his own legend, or simply displaying the confidence of a candidate who can finally call himself the sole frontrunner? Only time will tell, but Obama didn’t abandon his bread and butter. “We are one nation,” he said. “We are one people. And our time for change has come.” Those themes have worked so far, and are only getting stronger.

The real question is if the time for change has come for Hillary Clinton. Obama will take this victory and its attendant glowing press coverage and rampage through New Hampshire the next five days. The bounce he will see in the next round of polls should be considerable. But Clinton took third here tonight. She can’t go into New Hampshire with the same message and expect to compete with Obama’s momentum. But what can she change? It’s a particularly difficult question considering the fact that she is operating with a stripped-down tool kit. Inevitability is out the window, and Obama’s strong showing amongst independents probably tossed electability out too. She has only experience to point to now, and the recent Des Moines Register poll that got tonight’s results so correct identified that as a falling stock.

It’s possible that experience was never Clinton’s strength, or at least not its main component. It’s possible that Clinton was the safe pick, the known quantity. Like Romney on the Republican side, she would go before every sub-constituency in her party and tell them exactly what they expected to hear. Every narrow interest in the Democratic Party would be satisfied by a President Hillary Clinton; she was the establishment. But Obama’s appeal is somehow greater than the sum of those narrow interests, and now that Iowa has put its faith in him, it’s hard to see how other states won’t follow. That said, no one with Clinton’s money and organization should be counted out.

John Edwards faces a different conundrum. Beating Clinton allows him to see another day, but he has not cultivated a strong base of support in any of the other early states. Either his second-place finish will provide him with enough of a bounce to perform competitively in New Hampshire, or Obama’s megabounce will soak up all the voters willing to shift their preferences. With New Hampshire less than a week away, we won’t have to wait long to find out.

One last note. Polls aren’t useless, they are just usually so. As I mentioned earlier, the Des Moines Register poll nailed the results: Obama winning by roughly seven, with Edwards and Clinton more or less tied. But no other poll came close to this kind of prescience. American Research Group predicted Clinton 34, Obama 25, and Edwards 21 in its latest poll. CNN found Clinton 33, Obama 31, and Edwards 22. And so on. As it turns out, polls have a tough time predicting historic nights with unprecedented levels of voter participation. 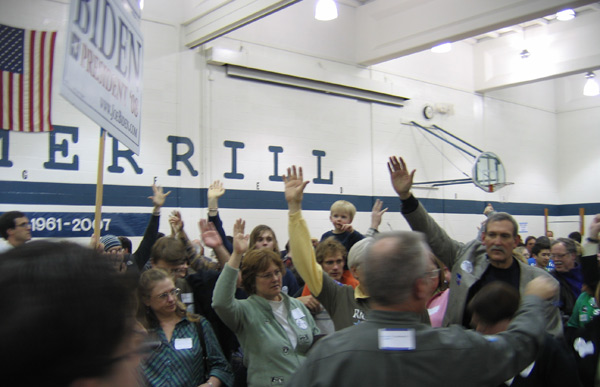