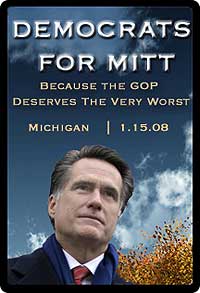 Kos is advocating a little election mischief in Michigan. The Democratic side of the January 15 Michigan primary is meaningless because the DNC stripped Michigan of all its delegates to the national convention when it moved its primary ahead of Feb. 5 without permission. Hillary Clinton and Dennis Kucinich are on the ballot there, but no one else is.

Happily, Democrats have lots of other options, because under Michigan state law, they can vote in the Republican race. So what is a good Michigan Democrat to do?

Kos says vote for Romney because a Romney victory would mean that Huckabee, McCain, and Romney will all have won one primary—no frontrunner means more turmoil, more negative ads, and more in-party fighting for the GOP. Keeping Romney, in particular, in the race makes sense because Romney goes negative the most often and has no qualms about tearing up his competitors.

Except there’s a problem: if no frontrunner emerges from the GOP’s early primary calendar, Rudy Giuliani has a much stronger chance in Florida and the February 5 super primary. And do Democrats want to accidentally help elect Rudy Giuliani? When Giuliani puts everybody in camps and bombs the entire Middle East, they’re going to feel terrible.

So what else can they do? Vote for Huckabee, a not-ready-for-primetime evolution-denier that holds fewer foreign policy credentials than the greenest Democrat? That’s an okay idea. Vote for Fred Thompson, just so the old man can make a decent showing before he drops out? Or vote for Ron Paul, who is right roughly half the time and is a delightful player on the national stage?

Before considering McCain, recognize that independents who don’t have the Democratic field available to them will probably flock to the Arizona Senator. He likely won’t need any help.

So the choice is yours, Michigan Democrats. If you actually want to take the time to go to the polls to vote in a meaningless election, you have a number of awful but bizarrely wonderful options available to you.