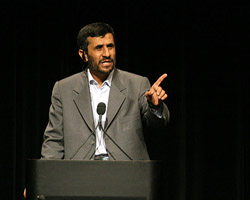 The immediate conventional wisdom spurred by the recent National Intelligence Estimate (NIE) on Iran was that its conclusions were good news for those favoring a diplomatic track with Tehran—and a devastating rebuke to those who desire military action. Hawks predictably cried foul over the intelligence community’s assessment that Tehran halted a secret nuclear weapons program in the fall of 2003 and is susceptible to international diplomatic pressure, and quickly sought to discredit the intelligence analysts who produced the 150-page document, only a short summary of which was unclassified and released (PDF). But as the dust settled, some foreign-policy wonks looking to put the brakes on the bomb-Iran crowd have become concerned about the NIE’s possible consequences. They say that just because the regime stopped its weapons program doesn’t mean the threat posed by a nuclear Iran should be underestimated. And they worry that the NIE may make it harder to rally international support to pressure Tehran, and, thereby, paradoxically, may make future military action more and not less likely.

“The more I digest everything…the more and more I begin to fear that the manner in which this NIE was written and released to the public is a disaster and a serious setback to an intelligent U.S. policy,” says a Democratic Hill staffer who works on Iran proliferation. “Our best hope for derailing the Iranian nuclear program and stop[ping] short of military action was for a concerted international campaign of diplomatic and economic sanctions coordinated at the U.N. Security Council. With the release of this NIE, and the inevitable distortions and simplifications echoing in press coverage, a third [Security Council] resolution is dead.” Further, he continued, it will now be harder to convince international financial institutions to boycott Iran, as the U.S. government has been trying to do for some time.

While the NIE stated that Iran had halted a secret nuclear weapons program, the remaining issue is Tehran’s efforts to produce highly enriched uranium in defiance of a U.N. ban. Iran says its nuclear program is for civilian purposes, but experts say that after enough highly enriched uranium is produced it can be weaponized without great technical difficulty.

“The NIE appears to focus narrowly on the issue of weaponization—in terms of weapon design and fabrication,” says Jacqueline Shire, a senior analyst with the Institute for Science and International Security. “A bigger concern is Iran’s development of the nuclear fuel cycle, from mining to uranium conversion to enrichment. Its operation of centrifuge cascades at Natanz”—one of Iran’s enrichment facilities—”demonstrates a commitment to mastering the enrichment process, which gives Iran a weapons-capability under the guise of a peaceful, civil nuclear program.”

According to Wayne White, a former State Department intelligence official, “The NIE clearly has made the passage of sanctions by the U.N. Security Council more problematic. Yet, to the extent the international community is not viewed as continuing to bear down on Iran, the Israelis will feel ever more isolated, perhaps ultimately resorting to military action against Iran’s nuclear infrastructure.” White noted that “an Israeli delegation reportedly is in Washington now in an effort to, in part, argue that the NIE is incorrect.”

Some recent events bolster this concern. This week, Russia resumed the sale and delivery of nuclear fuel to Iran after a long delay—a decision over which U.S. officials expressed disappointment. Immediately following the release of the NIE, China expressed doubt over whether international sanctions against Iran were warranted. China and Russia are both members of the United Nations Security Council which have reluctantly been persuaded to go along with two rounds of international sanctions against Iran so far; Washington has been seeking passage of a third round of tougher international sanctions, with difficulty.

Not everyone, however, believes the recent NIE will necessarily cause the international community to ease pressure on Tehran. Neil Crompton, a senior British diplomat until recently stationed in Iran, notes that it’s conceivable that some countries, particularly Germany and possibly China, might be less averse to joining a new round of international economic sanctions against Iran, no longer seeing such a move as part of a slippery slope leading to military confrontation.

Daniel Byman, a former government Middle East analyst who now directs Georgetown University’s Center for Peace and Security Studies, says the NIE’s findings will force the international community to reconcile its views about Iran’s nuclear program—not just a possible Iranian nuclear weapon. “Some people argue that no NIE has ever had a big impact on policy, but this one may,” he says. “The real question is, can people live with an Iranian nuclear program?”

The Democratic Hill staffer, not usually the type to find himself in sync with Iran uber-hawk John Bolton, says he recently found himself nodding in agreement with a Washington Post column the former U.N. ambassador wrote in early December after the NIE’s conclusions were released.

“While the president and others argue that we need to maintain pressure on Iran, this ‘intelligence’ torpedo has all but sunk those efforts, inadequate as they were,” Bolton wrote.. “Ironically, the NIE opens the way for Iran to achieve its military nuclear ambitions in an essentially unmolested fashion, to the detriment of us all.”

Whatever policy impact the NIE might ultimately produce, hawks, including Bolton, the Wall Street Journal editorial page, Weekly Standard, and presidential candidate Fred Thompson, quickly blasted its authors, particularly several former State Department officials. Bolton decried them as “not intelligence professionals but refugees from the State Department, brought into the new central bureaucracy of the director of national intelligence. These officials had relatively benign views of Iran’s nuclear intentions five and six years ago; now they are writing those views as if they were received wisdom from on high. In fact, these are precisely the policy biases they had before, recycled as ‘intelligence judgments.'”

Government sources and news reports identified three officials within the Office of the Director for National Intelligence (ODNI) as the primary targets of hawks’ ire: C. Thomas Fingar, a former senior official at the State Department’s Bureau of Intelligence and Research, who is now deputy director of national intelligence for analysis; Vann Van Diepen, a former State Department arms control official who clashed with State’s arms-control office when it was headed by Bolton and who currently serves as national intelligence officer for weapons of mass destruction and proliferation; and Kenneth Brill, a former U.S. ambassador to the United Nations’ International Atomic Energy Agency in Vienna who now directs the National Counterproliferation Center.

“Bolton and I and others in that [arms control] office were at odds with Van Diepen over the aggressiveness with which we needed to pursue sanctions [against Iran],” says former Bolton aide David Wurmser, who stepped down in August as a Middle East advisor to Vice President Dick Cheney, in an interview. Brill, Wurmser argues, “was simply too trusting of the IAEA.” He adds, “This is a fundamental tension between Bolton and the foreign service. We believe the only reason why [it’s worth] sitting in those jobs”—such as Brill’s post in Vienna—”is to pursue our national interests.”

The fight over the NIE is a continuation of the long battle that hawks have waged against professional diplomats and intelligence officials. In all these tussles, the hawks suggest—in one way or another—that the career diplomats and analysts are weak appeasers unwilling to take on America’s enemies.

White, the former State Department intelligence official, bristled at the suggestion that his former boss, Fingar, would slant the NIE. Such charges are “absolutely disgusting,” fumes White, now an adjunct scholar with the Middle East Institute. “Tom is perhaps the [most] professional intelligence official that I have ever dealt with.”

For its part, the ODNI organized a series of hasty briefings last week to beat back the conservative critique of the NIE and the hawks’ claim that its release was designed to constrain the president’s policy options on Iran. Last Tuesday, members of the Senate Foreign Relations Committee were invited to be briefed on some of the raw intelligence backing the NIE’s judgments at a previously unreported meeting headlined by Van Diepen; Stephen Kaplan, the vice chairman of the National Intelligence Council; and Leslie Ireland, the ODNI’s mission manager for Iran.

Around the same time, the ODNI sent out a statement by Donald Kerr, the principal deputy director of national intelligence, who defended the NIE. “National Intelligence Estimates contain the coordinated judgments of the Intelligence Community regarding the likely course of future events and the implications for U.S. policy,” he said in the statement. “The task of the Intelligence Community is to produce objective, ground truth analysis. We feel confident in our analytic tradecraft and resulting analysis in this estimate.” Bolton and other hawks had been picking on a handful of intelligence professionals with whom they had feuded in the past, even suggesting a conspiracy had been mounted by these officials. Kerr was responding with a basic point: The NIE was not the product of a few,; it was a consensus document produced by representatives of the entire intelligence establishment, which is made up of 16 agencies.

All this bickering and Kremlinology aside, the NIE makes it unlikely that President Bush will take preemptive military action on Iran in the 13 months remaining in his presidency. While State Department officials have long signaled that they were not aware of a decision to strike Iran before Bush left office, there’s no doubt the administration has used the threat of possible force as a tool of coercive diplomacy – in essence, to bluff. It is not just the hawks but the diplomats who worry that the reduced leverage will make it more difficult for the international community to persuade Iran to halt uranium enrichment. And they worry that if they fail, the military option may again be on the table for whoever next sits in the Oval Office.