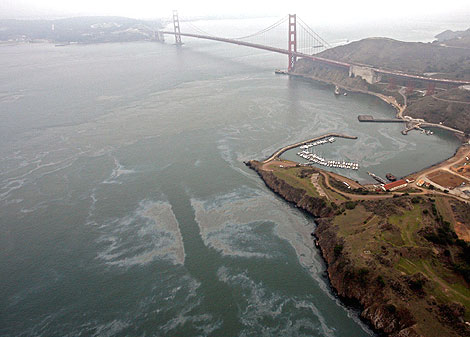 What do San Francisco Bay and the Black Sea have in common these days? Black waters fouled by crumbling ships, possibly bad seamanship, single-hulled tankers, and what always seems to be chronically inadequate first responders.

The San Jose Mercury News reports that the spill in San Francisco Bay has wafted north to foul the oyster beds in Point Reyes National Seashore, shutting down the Drakes Bay Oyster Company, which produces more than 80 percent of Marin County’s oyster crop. The Santa Rosa Press Democrat reports the bar pilot responsible for bringing the Cosco Busan into the bay claims the ship suffered from an inexperienced crew and faulty radar. Meanwhile, the Marin Independent Journal reports that frustrated residents of the seaside town of Bolinas have taken matters into their own hands, rescuing birds and scooping up fist-sized blobs of oil with colanders, laundry baskets and fishing nets:

“Ultimately, if they’re not going to send help, we’re going to have to do it ourselves,” said Bolinas resident Hermione Healy, who with her sister Krishna fished for oil that she described as “looking like pieces of asphalt floating by.”

And once again Google maps are bringing the disaster closer to home, wherever you are, including this one from KCBS:

Halfway around the world, the Strait of Kerch, connecting the Black Sea and the Sea of Azov, is reeling from the effects of up to 10 ships sunk in a monster storm Sunday. 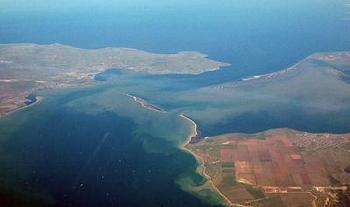 Looking north up the narrow Kerch Strait dividing The Black Sea from the Sea of Azov.

The Volganeft-139 tanker was carrying about 1.3 million gallons of fuel oil when the storm sundered it, losing at least half its load so far. The AP reports the ship was constructed for river use and was unfit to endure severe weather at sea. So far, more than 30,000 birds—some of the thousands migrating south from Siberia at this time of year—plus countless fish have been killed in an what officials are calling an ecological catastrophe. The Moscow Times reports that a freighter carrying 2,000 tons of sulphur sank nearby at nearly the same time:

“We hope that in the water sulphur will not form any substances dangerous to humans,” Mitvol [deputy head of the Natural Resources Ministry’s environmental watchdog] said. Several hours later, another freighter carrying sulphur sank off Kavkaz, Interfax reported… The same storm, which is expected to rage for up to three days, also sank a freighter with scrap metal off Sevastopol… The hull of [another] oil tanker Volganeft-123 cracked after being hit by high waves, but it was afloat and its oil products were not leaking.

Let’s face reality. Oil, once spilled, is bloody hard to unspill, no matter the circumstances. Get ready for talk about double-hulled tankers to resurface. Get ready for nothing to come of it. Again.

Julia Whitty is Mother Jones’ environmental correspondent. You can read from her new book, The Fragile Edge, and other writings, here.