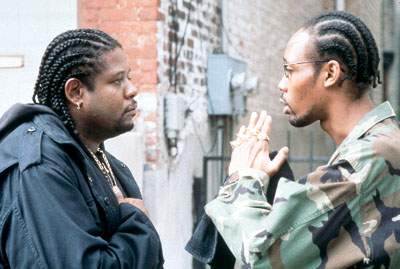 The RZA is a genius at putting music to fight scenes, and even better at putting the sounds of fight scenes to music. To complement this Wired interview with Bobby Digital himself, here’s a Riff rundown of the Wu-Tang Clan co-founder’s best cinematic work.

1. Ghost Dog: The Way of the Samurai (1999)
This Jim Jarmusch mob/samurai drama is a hybrid of Japanese, African American and Italian American cultures. Who better to compose the soundtrack than the man who first synthesized East Asian martial arts culture and New York hip-hop on the Clan’s 1993 debut, Enter The Wu-Tang? RZA sets an eerie tone for the movie, with dark and heavy bass lines and samples that propel the movie’s narrative forward. During fight scenes, the mellow music matches Ghost Dog’s cool, thoughtful demeanor. Works as a stand-alone album as well as a soundtrack.

2. Kill Bill: Volume 1 (2003)
The four tracks that RZA contributed to this East-meets-West Tarantino masterpiece are more traditional movie fare—they’re not meant to stand alone, but rather to enhance the scene. In contrast to the dark mood of Ghost Dog, the comic book feel of Kill Bill 1 inspired livelier RZA pieces. Individual instruments played one at a time match fighters’ specific weapons and moves. Influences range from hip-hop poetry on “Ode to Oren Ishii” to a J-pop feel on “Crane-White Lightning” to a Spanish guitar-strumming, old West shootout sound on “Yakuza Oren 1.”

3. Afro Samurai
RZA’s soundtrack to this Spike TV show about a futuristic, afro-adorned samurai trying to avenge his father’s death is as underrated as the show itself. It ranges from funky to soulful to militant, and it features rappers Talib Kweli, Q-Tip and Big Daddy Kane, as well as RZA’s cousin, the GZA. “Afro’s Father Fight” is pure funk, while “Take Sword Part 1” gives the fights an epic, apocalyptic feel. Picture Sam Jackson cruisin’ while you’re listening to the album, and you’ll see how badassss it is, even if the vastly different styles make it too disjointed to be a classic.

4. Blade: Trinity (2004)
Wu-Tang Clan fans might be disappointed to find that this Wes Snipes flick’s soundtrack sounds much more like generic commercial rap than RZA’s other movie compositions. It features Lil Flip, E-40, WC and the rest of the Wu-Tang Clan, but not in any particularly noteworthy songs. The one Crystal Method song, “Weapons of Mad Distortion,” is completely out of place on this hip-hop album, and seems like a failed attempt to make the soundtrack eclectic. The high point is “Daywalkers” with Ramin Djawadi, a shadowy track with an electronic, trance influence, perfect for the movie’s fight scenes.

If you’ve overplayed your Wu-Tang library and can’t wait for the December 4th release of 8 Diagrams, these somewhat hidden RZA gems should tide you over.