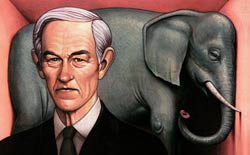 Illustration: Marc Burckhardt This is interesting. It appears that a portion of Ron Paul’s online buzz is fake, and actually illegal. According to the University of Alabama at Birmingham’s Spam Data Mining for Law Enforcement Applications project (quite a name, that), which looks at hundreds of thousands of spam emails a month and recently got its hands on some Ron Paul forwards, some of the email support for Paul is coming out of spambots.

The e-mails had phony names attached to real-looking e-mail addresses. When lab researchers examined the IP addresses of the computers from which the messages had been sent, it turned out that they were sprinkled around the globe in countries as far away from each other as South Korea, Japan, the United Kingdom, Nigeria and Brazil.”The interesting thing was that we had the same subject line from the same IP address, and it claimed to be from different users from within the United States,” [project head Gary] Warner says.

One e-mail was designed to look as if it came from within a major Silicon Valley corporation, he notes. But when the researchers looked up the IP address, the computer from which the note was sent was actually in South Korea.

The emails, which actually include portions of Ron Paul’s platform and recite many of the Paul talking points, apparently have been laundered through something called a botnet, which is illegal. The campaign has denied any knowledge of the phenomenon.

Okay. So here’s the thing. The massive amount of support Ron Paul gets in the comments section of blogs across the internet can’t be faked. (It was so extreme that Redstate.com went all Judge Dredd on its users and banned newbies from discussing Paul.) The money raised and the event turnout can’t be faked.

So the well-intentioned Paul supporter who was trying to get his (or her) man’s word out through this botnet operation probably did Paul more harm than good. The very real support Paul is getting can now be wrongfully dismissed as no more than internet shenanigans.