“…everybody talk about, pop music.” Ahem. Anyway, holy moley, Riff, it’s been an eventful week around central Europe and my sincerest apologies if you’ve been awaiting my latest update, wondering if I’m still alive or if I’d succumbed to a plague or a hostel that turned out to be a crazy movie torture prison or something. No, and no, everything’s fine, but with barely enough time to sleep a few hours each night I’m afraid Riffing has slid a little on the priority list. Here’s a quick recap. 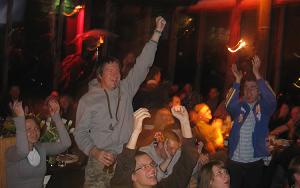 First of all: Poland. When I wrote here last Friday, we were headed to Krakow for a gig that turned out very well, attended mostly by tourists and people who didn’t really know who I was but hey, an up-for-it crowd is an up-for-it crowd. Krakow itself was stunningly beautiful, covered with about a foot of snow and sparkling like a fairy tale. Sadly, I missed seeing much of it since we had to get up the next morning and head back to Warsaw for the Saturday night gig, something we were a little nervous about: Poland’s national soccer team was playing Belgium in the qualifying match for the Euro 2008 championships that night (in fact, the game would be shown on big screens at the venue we would be DJing at later), and with Poland never before qualifying, a loss could have meant a big downer for the party. So we were at the edge of our seats, and thankfully, Poland dominated the game, winning 2-0. Later, I played to a packed dancefloor and for my final track put on the aforementioned mashup I’d made with Polish band Kult’s “Polska,” whose refrain of “Poland, we live in Poland,” suddenly seemed tailor-made for the moment. So, let me just say this: if you ever have a chance to DJ in a foreign country, arrange to do it after a major soccer victory, and make a track to play that repeats the name of the country over and over, and wear that country’s soccer scarf during your set so you can hold it over your head during this song, and then maybe take a big swig of the bottle of local vodka someone’s stashed on stage, because the wave of cheering euphoria that you’ll ride will be an experience to tell the grandkids about. 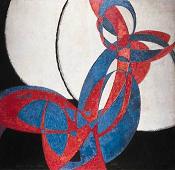 Prague was on the schedule as a rest break between fast-paced sections of the tour, and I had no gigs there, but met up with a San Francisco friend who showed me around. I was surprised to find much of the city incredibly cheap: a great meal for two (with totally drinkable local wine) at a Czech place a little outside the tourist area ran us about $27 total, and we’d even ordered an extra plate of doughy potato croquettes accidentally. The expat community was kind of interesting, and I met a bunch of Americans, some of whom seemed as pleased with their own insider-y knowledge of the place as jaded LA hipsters, and some of whom seemed fascinated and humbled by their surroundings. The Veletržní Palác museum on the city’s north side is definitely worth a visit: their František Kupkas include the inspiring “Fuge in Two Colors”, a painting whose intersecting spirals seem to have predicted those microscopic pictures of proton collisions, or whatever. 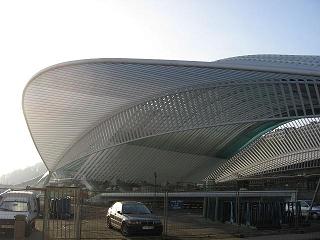 On Friday it was on to Liege, Belgium, a city about halfway between Brussels and Koln, Germany, and it seems slightly industrial, without much in the way of tourist attractions. So, perhaps inspired by Bilbao in Spain, they decided to throw some money at a star architect to build them a monument: a train station designed by Spaniard Santiago Calatrava. His sweeping white constructions, evoking skeletons or ships, have always seemed stunning to me in the pictures I’ve seen in architecture magazines and stuff. I knew about the plans for Liege, but didn’t realize construction had even begun, so I was surprised to exit the train on Friday and find myself under a giant canopy made of the architect’s signature thick white tubing. At first it’s incredibly impressive, the huge structure almost geological in size. While the main roof over the tracks is completed, the rest of the station isn’t, and the ticket window and a few stores are located in a small temporary structure off to the side, accessible by kind of sad metal ramps. So, I’m hesitant to judge the building yet, as I didn’t have the full experience of entering from the front and standing under the central curve of the station’s full height. However, there are some problems that seem pretty evident already. 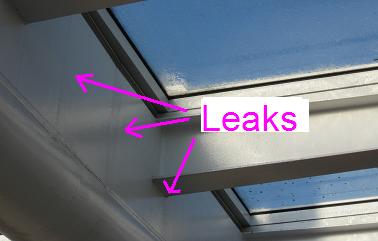 First of all, on a micro scale, it already seems kind of old and dirty. The white tubing is already stained with dirt and water lines from leaks in the glass roof, and the white concrete ramps that lead up from the tracks have the dusty look of an old basement wall. Again, perhaps they’re still working on things, but the leaky roof seems inexplicable. On a macro scale, the problems are even more troubling. Liege is a charming city, with mostly 3 or 4-story brick buildings surrounded by small hills, and while I’m all for the mixing of modern and classic architecture, the scale of Calatrava’s creation is completely out of control. It has the eerie look of scenes in sci-fi movies where gargantuan spaceships descend over cities: the comparison of trees and houses with this overwhelming, alien thing is deeply, almost instinctively, unnerving. The station towers over the city, incomprehensible, a section of the roof extending out impossibly far over what will I assume be a plaza, and the city seems to cower in its presence. Calatrava’s work is, for sure, meant to exist as sculpture as much as it exists functionally in the existing urban fabric, and his Milwaukee Art Museum is a good example of how well this works when it does: it perches in a spot where it seems almost smaller than its actual size, both impressively engineered and also kind of, well, cute. But the station in Liege seems even larger than it is, self-indulgent, bloated, and not in the spirit of the city at all.

Coming soon: tales from Munich and Paris. Will Party Ben get that cold he’s been fighting off so far? What will German waitresses say when Party Ben’s in their way? What’s up with the new French music and dance craze, “Tectonic”? Stay tuned…