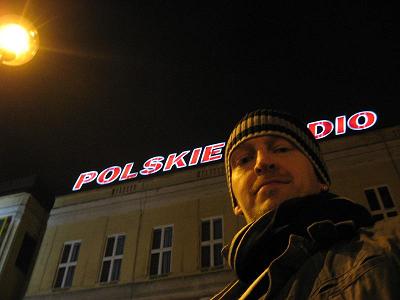 Greetings from the land of Pierogi and pope-worship, as I’m ramping up the first leg of my amusing little European DJ tour here in Poland. It’s my first time here, and my impressions are colored (perhaps unfairly) by the years I lived in Russia: the language, culture and even the look of the place is both oddly familiar and totally weird. Poland seems to have had a head start on capitalist enterprise, and the city is full of fancy restaurants, nice hotels and brightly-lit shops, but the Stalinist “Palac Kultury i Nauki” still towers over the city and rickety old tramways share the rails with fancy new models. But every time I forget I’m in the Eastern Bloc, someone will swear using an all-too-familiar elaborate Slavic-rooted verb construction, and I’ll remember: this ain’t Vegas.

My visit here began with an interview and live DJ set on Radio Bis, one of the country-wide government broadcasters, this one aimed at young people but with a lot of specialty shows and “alternative” music, like a younger KCRW or a less dance-heavy BBC Radio 1. Their studios are located in a labyrinthine building in the southern part of the city that I was informed used to be a prison—its thick walls were deemed perfect for soundproofing. My appearance was on the “Bardzo Inna Selekcja” show, which means, appropriately, “Very Different Selection,” and let’s just say it’s amusing having interview questions and answers translated back and forth. The DJ set was marred by a malfunctioning CD player making beatmatching basically impossible, but the host assured me nobody noticed, and I probably redeemed myself anyway by playing a mashup I’d finished that day of a classic underground Polish band called Kult; their 1992 track “Polska” with its triple-time beat and bitter refrain of “Poland, we live in Poland” meshed amusingly with M.I.A.’s pithy question “How many boys there?” and the beat from Gary Glitter’s “Rock ‘n’ Roll Part 2” (I’ll upload it when I have better bandwidth). When I put it on, the producers in the next studio pressed the intercom button and were only able to say “whoa,” and they demanded a CD to put it into heavy rotation starting tomorrow from what I understand. It’s not really that good, but hey, I’m humbled.

Here’s the original of “Polska” if you’re interested.
Kult – “Polska” (from Posłuchaj to do ciebie, 1992) 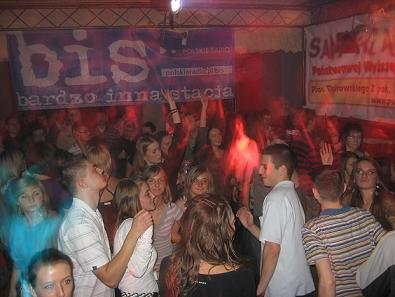 A nightclub gig in Płock last night (co-sponsored by Bis, as you can see from their banner in the photo at right) went spectacularly, especially since I had no idea where we were going (about 90 minutes west of Warsaw, turns out) or even how to pronounce it (“Pwatsk”). The city was actually quite beautiful, with tiny cobblestone streets lined with ancient-seeming buildings, and the crowd at the club was wildly enthusiastic. I was anxious about what to play, since a lot of what I do is meant to riff eyebrow-raisingly on popular culture, and I’m not sure what songs people know here, but considering they sang along with most of the tracks, I shouldn’t have worried. A couple people knew came up and told me in halting English what big fans they were, which is also kind of surreal: witness the power of the internet.

Off to Krakow this afternoon for a gig in what I’m told is a kind of tourist-oriented city, with a lot of Brit merrymakers hanging around, so perhaps they’ll show up and demand I play Babyshambles or something. Then it’s back to Warsaw on Saturday for the big climactic gig of the Poland leg of the tour, or we’ll see if that turns out to be true.

On a side note, while I haven’t been affected by the transit worker strikes in France and Germany, I’m a bit worried, since I need to take a German train to get to a gig in about a week, and then the whole French tour in two weeks is entirely train-dependent. I find myself unable to rouse my usual feelings of solidarity with the oppressed workers, especially since the idea of demanding retirement at age 50 (in the case of France) is so far out the window of American job benefits as to be completely hilarious. Like, try finding a dentist on the CBS health plan, you’ll happily drive a subway for 15 more years instead. The German workers are apparently striking for more money, and with the Euro in the stratosphere, their 40 or 50,000€ salaries suddenly seem pretty damn generous as well. But come to think of it, if the strike is still going on and I’m forced to rent a snazzy BMW and speed down the Autobahn, I won’t complain.