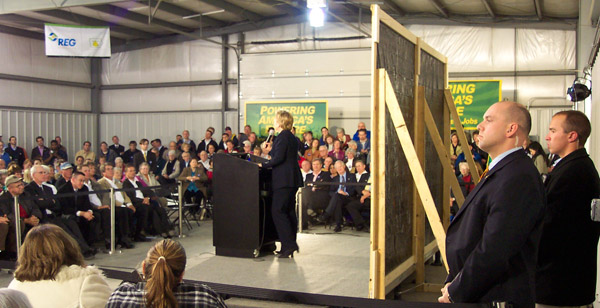 One of the “major” news stories on the presidential campaigns the last few days has been Hillary Clinton’s mini-scandal over a planted question at a campaign event in Newton, IA. As Michael Scherer points out in Salon, a planted question is really just par for the course in a political campaign season captured, top to bottom, by artifice.

I was at the event in Newton. And the event there perfectly illustrates the fakery that composes every event for a major candidate. Believe me, it goes well beyond just one planted question. Follow me on a tour of a presidential campaign event, after the jump.

Hundreds of attendees, 30-40 members of the media, and a phalanx of staffers descended on the biodeisel facility outside Newton, IA, around 11 am. The media members present represented every major TV network and cable news station, most if not all of the major papers, the occasional magazine, and even some foreign countries. Clinton attracts larger crowds and more media than almost any other candidate, and her events are tightly scripted and professionally run. Staffers are better dressed than their counterparts on other campaigns, with more expensive suits, more stylish haircuts, and fancier shoes. Frankly—and it’s not clear how this is possible—they are better looking. 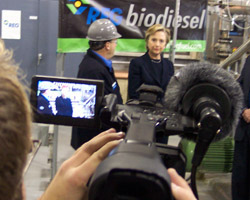 Before Clinton’s speech in Newton, the press was handed hard hats and protective goggles and herded into the biodiesel plant, eventually stationed behind several of the zip cord barriers used in airport lines. A representative from the plant held up a vial of yellow liquid, identifying it as biodiesel. She explained that the plant turned soybean and other vegetable oils, as well as animal fats, into fuel usable in any diesel engine. “It smells like vegetable oil,” she noted. Cameramen, uninterested in the helpful biodiesel facts, argued with Clinton’s press staff and jostled one another to get three feet closer to where the candidate would eventually stand. Boom mic operators on different sides of the room held their equipment over the crowd’s collective heads so they could talk to one another at a normal volume, hearing each other in their headphones.

A couple of bored employees who were actually making the plant function were hidden behind a metallic gray vat sitting on a green pump. The whole thing was hooked up to a series of tubes and a banner carrying the name of the plant’s owner. Eventually, Clinton walked in with a representative of the plant, former Iowa Governor Tom Vilsack, and an unidentified man in a suit. They all stood in front of the vat and banner, speaking in normal tones. The boom mic operators strained to get their mics within a few feet of Clinton, but all the other members of the press just stared at moving but soundless lips from twenty feet away. The only sound was the furious clicking of the cameras. After five minutes in which none of the principals moved more than a foot in any direction, Clinton and company moved on to another part of the plant. The media, pregnant with questions, was ushered out the way they came, dumping hard hats and goggles in a bin on the way out.

The photo-op was followed by Clinton’s speech, which took place in a hall next door to the plant. Her speech presented the opportunity to get a count of who and what was in the room: eleven video cameras, four or five sound men, and seven photographers who eventually became so bored that they took photos of one another taking photos of Clinton. One elderly woman in the audience was knitting while listening to the senator speak, a fact so remarkable that a photographer with a 8-inch lens crouched no more than two feet from her face and took 45 seconds worth of photos.

After the event, Clinton shook hands and signed autographs and then disappeared. The press didn’t get to ask a single question, which means the Clinton campaign managed to ask one more question of itself than the media was able to ask.

Artifice is everywhere. One fake question is a drop in the bucket. 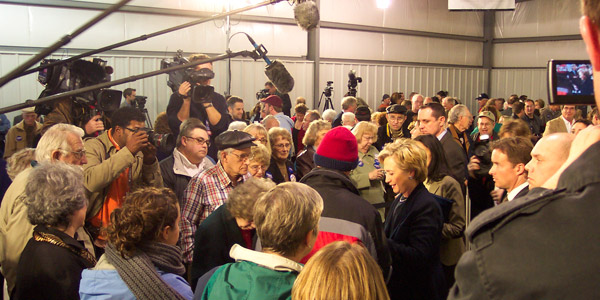