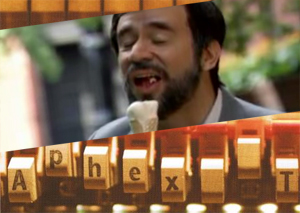 While I was out and about and missed “Saturday Night Live”‘s season premier, there were a couple items of note; first, Kanye’s odd musical appearance (more on that here), and second, the “Iran So Far” digital short. This is Andy Samberg’s deal, once again proving that just as he continues to be nearly unwatchable as a live performer on the show, he knocks every one of these pre-recorded pieces out of the park. It’s a fair trade-off. This “Iran” piece riffed on Mahmoud Ahmadinejad’s recent remark at Columbia that there are no gays in Iran, with Samberg professing his love for the Iranian president, and in a most definitely gay way. With cameos by Maroon 5’s Adam Levine and Jake Gyllenhaal, the track could go on to be another internet hit like “Lazy Sunday,” but NBC seems to be holding back. Copies of the clip have been removed from YouTube, but you can’t watch it on NBC’s site either; clicking on the video brings up an error. What could be the problem?

Well, it turns out Samberg might have gotten a little too sample-happy. It turns out that the delicate piano melody that forms the basis of the tune was taken directly from an Aphex Twin song, “Avril 14th,” off the 2001 album drukqs, and it appears they didn’t have clearance for it. Oops. You can just imagine the stern talking-to Lorne Michaels probably gave Samberg this morning. “Andy, I just got a very angry phone call from Warp Records, would you know anything about that?” “Sorrrryyy…” The Daily Swarm is reporting that an “SNL source” says they’re working on getting all the right clearances, and hopefully then you’ll be able to watch it without guilt on NBC’s site. But until then, I found a link they haven’t shut down yet. I have to say, I get a little verklempt hearing the cheers after the line, “I know you said there’s no gays in Iran, but you’re in New York now baby.”