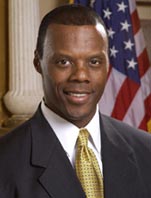 One of America’s three or four prominent black Republicans, J.C. Watts, has a column today about the Republican Party’s refusal to reach out to black voters. While I agree with most everything Watts says here, it doesn’t appear that Watts is advocating a party platform friendly to minority rights—he doesn’t argue for affirmative action, hate crimes laws, increased numbers of minorities in high-level party positions, or anything else. He just wants a little of the presidential candidates’ pandering to be thrown the way of the African-American community. After explaining that John McCain pandered to the religious right and Rudy Giuliani pandered to the NRA, Watts writes:

For longer than I’ve been involved in the political process, the Republican establishment has claimed to want to provide an alternative for the black community, yet party elite refuse to show up for the game.

The more I ponder some of the boneheaded decisions GOP candidates have made of late, I can’t bring myself to believe that they are serious about capturing more than about 8 percent of the black vote.

I have often said one of the reasons more blacks don’t support Republicans is because they don’t trust the GOP establishment. I can, without fear of contradiction, assure you the Conventional Wisdom Caucus and the Status Quo Caucus and the same-old-tired-establishment consultants are running the GOP front-runners’ campaigns — and aiming to get no more than 1/12th of the black vote.

As evidence, I point to Colorado Rep. Tom Tancredo, who was the only Republican presidential candidate to speak at the Urban League convention in July, and the fact that none of the Big Four GOP candidates showed up at Morgan State University (a historically black college) for a candidate forum hosted by National Public Radio commentator Tavis Smiley. Hmmm.

I’m perplexed by these actions because candidates say one thing about inclusion and outreach but they do another. How can you do outreach and not reach out? Not showing up for these events was a grievous and inexplicable error.

But the most damning thing Watts points out is this: “Once in the general election, and safely out of the cloistered world of Republican primary politics, our nominee will want to trot out black faces — usually black Republicans — to try to win the black vote. This is insulting when you consider he likely didn’t show up at events that were established to reach out to the black community. ”

Completely, totally right on. Remember the parade of smiling black delegates and speakers who were featured so prominently at the Republican convention in 2004? Ask them what Bush has done for their community. Just a year after that phony media circus, the president’s approval rating amongst African-Americans was two percent.