back to business as usual: “I think the suffering in Iraq is much greater continuing the war than it would be if we end it by coming home. The Iraqis will survive our departure. They’ve seen invading forces come and go over the centuries and they’ll find a way to make a go of it. There will continue to be friction between the Sunni and the Shiite; there always has been.” —George McGovern, coauthor, Out of Iraq

we’re not the problem: “The notion that if we leave, the cause of the violence will leave—it could not be more wrong. The violence in Iraq is overwhelmingly Iraqi on Iraqi. It’s only secondarily Iraqi on American. It’s a pipe dream at best to expect that if we go away the problem will go away.” —Stephen Biddle, Council on Foreign Relations

what is civil war for: “Once American forces leave, I don’t think there will be any more violence than there is now. But there will be purposeful violence and civil war will be allowed to do the job of civil war, which is to bring peace by separating out communities, creating boundaries that can be respected. [It means] allowing the Iraqis to determine their own fate, instead of having General Petraeus determine their fate.” —Edward Luttwak, Center for Strategic and International Studies

apocalypse? no: “I think that calling it ‘civil war’ is dignifying what would probably happen. It’s going to be a messy, confusing series of grabs for power, much like the Lebanese Civil War was. But this kind of apocalyptic struggle between the Shiites and the Sunnis—I frankly don’t see that happening.” —Colonel Gary Anderson (USMC, retired), Pentagon consultant

iraq isn’t lebanon: “What we are going to see happen is that certainly southern and part of central Iraq will become the first Shiite Arab state since the Middle Ages. And then the Sunnis who live in the west will be strongly supported by their brethren in Jordan, Egypt, Saudi Arabia, and the Emirates. The sooner you leave, the sooner that fight will be resolved. I don’t buy the notion that Iraq will become Lebanon for 10 years.” —Colonel Douglas Macgregor (retired), military analyst

sunnis lose: “If we leave right away, we’re just signing the death warrants for thousands, maybe hundreds of thousands, of Sunnis. No [Shiite] politician would come out in favor of what he privately believes, and that is killing all the Sunnis.” —James Dunnigan, military strategist

shiites lose: “Most people underestimate the Sunni Arab forces. They think, ‘Well, they’re 20 percent of the population.’ But they punch way above their weight. The Shiite militias may well be overwhelmed even in their strongholds by these guys.” —Juan Cole, professor of Middle East history, University of Michigan

everyone loses: “Nobody’s going to march on Baghdad and plant a flag and say, ‘I’ve won. I rule Iraq.’ That’s not gonna happen. The Shiites aren’t going to dominate the Sunnis; the Sunnis are no longer going to dominate the Shiites. And the Kurds certainly aren’t going to collapse; we wouldn’t let that happen, and I don’t think the Turks would let that happen either. So the end state in this thing is that there is no positive end state.” —General Anthony Zinni (USMC, retired), former CENTCOM commander

a separate peace: “Most analysts believe that Iraq is headed firmly in the direction of what we might call a highly decentralized state. Some people call it ‘soft partition,’ which it may be, but I think it’s just that Iraq’s population is fundamentally un-mixing. There always have been parts of Iraq that have been dominated by particular sectarian ethnic groups, but there have been huge swaths of Iraq that have been very mixed. Baghdad is on the brink of becoming a Shiite-dominated city when it used to be incredibly intermixed.” —Colin Kahl, Center for a New American Security

blood is thicker than oil: “The war is not about sharing oil revenues. It is not about holding provincial elections. It is so fundamental; I don’t understand why so many people don’t get it. It is impossible for Iraq’s leaders to agree on a program of national reconciliation and there’s an impression that this is because they are obstinate or lazy. That’s nonsense. The reason they cannot agree is that their constituents do not agree.

“The Shiites believe that because they suffered for 1,400 years and for 35 years under Saddam, their majority entitles them to rule Iraq. They voted 90 percent for Shiite religious parties. The Sunnis, who were the rulers of Iraq, can’t accept that they no longer have power. Both cannot accept an Iraq defined by a branch of Islam of which they are not members. I’m a Protestant. I’m not religious at all, but if somebody were to define the United States as a Catholic country, I would resent it because I would say, ‘Well, I’m not a Catholic.'” —Peter Galbraith, adviser to the Iraqi Kurdish government

or not: “My personal experience has been that at the most fundamental level, people don’t really care if it’s a Shiite, a Sunni, a Kurd, or a Turkoman who is providing them security, as long as that force treats them with respect. The vast majority of Iraqis don’t want this kind of violence, obviously. They want to live normal lives; they want a better future for their children. This kind of ethnic and sectarian tension that leads to this kind of violence is not natural among Iraqis. This is something that has been deliberately incited by Al Qaeda in Iraq.” —Colonel H.R. McMaster, adviser to General David Petraeus

Getting the diplomats back on the job

back to the table: “One of the big things that this administration has failed to do is prepare the region diplomatically for our ultimate withdrawal. We know we are coming out of there, so what can we do to make it a little bit more elegant? But this administration has just ignored the diplomatic tools available and has dumped this entire problem on the American soldier.” —Maj. General Paul Eaton (retired)

a new coalition: “I believe we overuse the military. We haven’t deftly integrated the diplomatic, economic, and cultural things we could have because we’re not very good at it; certainly this administration is terrible. Its doctrine of trying to impose democracy and market economy at the point of a bayonet is a losing strategy. The new administration will have an opportunity regardless if it’s Democratic or Republican because what I sense out there, all over the world, is they’re so hungry to reestablish positive relationships with the United States; they’re so hungry for us to take a different kind of leadership role. But you can’t continue to suffer the casualties in this sort of sinkhole that goes nowhere. It’s important to reestablish the regional security arrangement, the old Gulf coalition, that we’ve broken by going into Iraq. They like the idea of American support and security assurances as long as they don’t come with a heavy military presence or preemptive actions that become more destabilizing.” —General Anthony Zinni (usmc, retired)

breaking up is easy to do: “I’m not sure you can make Iraq a country at this point. The best thing we could do is work with them to continue to do what they’re doing already now, which is this breakup. The least bad option is that Iraq breaks into a loose federation: The Kurds have their area; the Shiites have theirs; the Sunnis have theirs. The ethnic cleansing continues, but at a low level. Things will get much better for the Iraqis, but it’s not an explosively violent situation.” —Colonel T.X. Hammes (USMC, retired), counterinsurgency expert

or not: “Partition is a synonym for ethnic cleansing.” —John Pike, GlobalSecurity.org

bad actors: “The conflict has shifted from what had been predominantly an insurgency to a communal struggle for power and survival. There are also external sources of instability, both in the form of Al Qaeda, but also Iran’s efforts to destabilize Iraq through its sponsorship of extremist Shiite militia. They keep the cycle of sectarian violence going.” —Colonel H.R. McMaster, adviser to General David Petraeus

know your enemy: “We’ve always tried to identify the enemy in this war as monolithic. Remember at the beginning of this war there were dead-enders, and then there were insurgents? Well, they’re not. They’re criminals, they’re Al Qaeda, they’re foreign fighters, they’re local militias, each of which requires a different approach. But we sort of all treated them the same until recently.” —General Anthony Zinni (USMC, retired), former CENTCOM commander

standing army: “A collapsed Iraq is no more appetizing tomorrow than it is today. We are a long way from an Iraq that can stand on its own. If there is any part of the Iraqi state that even functions a little bit, it is the Iraqi Army. It is the nucleus around which any functional Iraqi state has to form. It will be crushed and reduced to a collection of sectarian militias if the American supports are pulled away from there.” —Thomas Donnelly, American Enterprise Institute

welcome back, saddam: “It is hard to see anyone in the Iraqi political scene who’s going to be the political savior. If there is a strong leader who does emerge, he is likely to be someone who will have more authoritarian tendencies. We would not like it, but my counsel would be to accept it. Having someone like a Nasser or a Tito may in fact wind up being one of the best things that could happen as a way of achieving at least a modicum of stability within which we could pull out faster and more completely.” —Paul Pillar, former top CIA official

irreconcilable differences: “These people are very tired of this war. But they don’t know how to end it because reconciliation is not in their experience. It is not a theologically based war; this is a war about power redistribution. There is no room for compromise.” —Colonel Paul Hughes (retired), former director, Strategic Policy Office, Coalition Provisional Authority

Click the image below to see a chart related to this story: 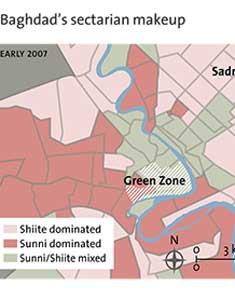