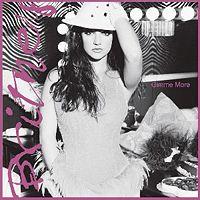 And now, we turn with the usual trepidation towards those thermometers up the wazoo of our nation’s zeitgeist: music sales charts. What are we buying, how sick are we? Let’s take a look at today’s iTunes top ten songs, and for added multimedia enjoyment, open up your iTunes program and listen to the 30-second excerpts of each song. It’s 1/6 of a song, for free!

1. Britney Spears – “Gimme More”
Well, as I’ve said before, there are good things about this song, but none of those things involve Britney Spears. The track’s climb to #1 seems to be evidence of some sort of scientific breakthrough: no matter how far an American celebrity dives down to the quantum level of supposedly career-ending debasement, the axiom of “no publicity is bad publicity” still holds true. It’s a unified field theory of celebutards!

2. Soulja Boy – “Crank That”
Still hanging around near the top of the charts, I still believe this is a hit only because of the “youuuuu!” part. It’s not bad, there’s just so little going on: some inoffensive steel drum noodling and a car-commercial-style orchestral stab. But people sure like saying “youuuu!” along with it.

4. Feist – “1234”
Does everyone at Apple touch themselves when this kind of thing happens? “Look, we put Feist in our commercial and turned the song into a hit! Our power is unlimited! We are so pretty, so very very pretty!” Well, I resisted Feist’s charms to no avail: I now love this song.

5. Timbaland – “Apologize” (feat. OneRepublic)
One of the three tracks on Timbo’s new album to feature alt-rock dudes in an ill-advised crossover attempt, this isn’t even the worst of them. It’s still pretty terrible though: a maudlin emo ballad laid awkwardly over a D-level Timbaland beat. You apologize.

6. Colbie Caillat – “Bubbly”
What? Who? What is this? How do I say her name? “KAY-lat?” “kwa-YAH”? Is she from a Disney movie? Okay, here’s Wikipedia: “She is noted for her MySpace profile which led her to become the number one unsigned singer in her genre for four months.” So, she’s our Lily Allen? That’s just sad.

7. Matchbox Twenty – “How Far We’ve Come”
How are critics supposed to prove they’re open minded when such phenomenally putrid slabs of steaming crap are set out in front of them? Mercifully, immediately after listening to it, I have no memory of any details of this song whatsoever, just a feeling of hatred for humanity.

8. Nickelback – “Rockstar”
Okay, here’s an opportunity to be surprising: this makes sense, sort of, it’s catchy and pleasant, and kind of funny. Basically this is hip-hop through a country mirror: a glacially slow beat, lyrics that celebrate riches while at the same time acknowledging their awesome power over us. I’ve been known to leave this on if it comes on in the car.

9. 50 Cent – “Ayo Technology”
Like Brit-Brit at #1, the many good things about this song have little to do with Mr. Cent: his performance is kind of lazy, and it makes you wonder how much he really wanted to whoop Kanye in the hip-hop battle of the millennium. If it was really that big a deal maybe you could have put down the GameBoy before cutting this vocal?

10. Timbaland – “The Way I Are”
Timbo’s weird tribute to trance music, with its insistent synth line, is more proof of the fascinating cross-pollination happening between hip-hop and electro right now, and its continued presence in this top ten, two months after its release as a single, proves it’s one of the songs of the year. And that’s a scientific fact.