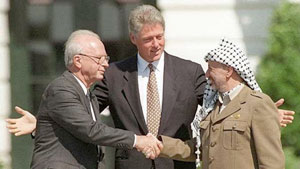 I was reading Matt Yglesias’ summary of Hillary Clinton’s foreign policy plan (one-line synopsis: just like Edwards’ and Obama’s, but a shade more hawkish) and noted this paragraph from Clinton on the Israeli-Palestinian issue.

Getting out of Iraq will enable us to play a constructive role in a renewed Middle East peace process that would mean security and normal relations for Israel and the Palestinians. The fundamental elements of a final agreement have been clear since 2000: a Palestinian state in Gaza and the West Bank in return for a declaration that the conflict is over, recognition of Israel’s right to exist, guarantees of Israeli security, diplomatic recognition of Israel, and normalization of its relations with Arab states. U.S. diplomacy is critical in helping to resolve this conflict. In addition to facilitating negotiations, we must engage in regional diplomacy to gain Arab support for a Palestinian leadership that is committed to peace and willing to engage in a dialogue with the Israelis. Whether or not the United States makes progress in helping to broker a final agreement, consistent U.S. involvement can lower the level of violence and restore our credibility in the region.

It will be nice to have a president come into office with this mindset. In comparison, George W. Bush announced at his first National Security Council meeting, “We’re going to tilt back toward Israel.” When Colin Powell warned that such an attitude might lead to excessive uses of force by the Israeli army and a victimized Palestinian population, Bush responded, “Sometimes a show for force by one side can really clarify things.”

So we’re miles ahead of nonsense. In fact, a commander-in-chief with Clinton’s position on the issue would mean that we’re roughly back to the attitudes that led to the last serious shot at peace between the Israelis and the Palestinians, under President You-Know-Who. Which begs the question, if Bill is looking for role as First Gent (“If Hillary wins, I want to do whatever she wants me to do.”), maybe he can be America’s lead negotiator on this issue. Lord knows he’s got the gravitas and the experience.