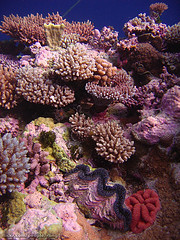 We’ve known for a while that ocean acidification is a bad bad thing. Now new research into corals using boron isotopes indicates the world-ocean has become about one third of a pH unit more acid over the past fifty years, reports the Australian Research Council. The acidity is caused by a CO2 buildup in the atmosphere, which then dissolves into the oceans—a development likely to be lethal for animals with chalky skeletons, who just happen to comprise more than a third of the planet’s marine life.

Apparently this acidification is now taking place over decades, rather than centuries, as originally predicted, and is happening even faster in the cooler waters of the Southern Ocean than in the tropics. Corals and plankton with chalky skeletons rely on sea water saturated with calcium carbonate to form their skeletons. As acidity intensifies, it becomes harder to form their skeletons. According to Ove Hoegh-Guldberg of the University of Queensland: “Analysis of coral cores shows a steady drop in calcification over the last 20 years. . . When CO2 levels in the atmosphere reach about 500 parts per million, you put calcification out of business in the oceans.” Atmospheric CO2 is presently 385 ppm, up from 305 in 1960. “It isn’t just the coral reefs which are affected—a large part of the plankton in the Southern Ocean, the coccolithophorids, are also affected. These drive ocean productivity and are the base of the food web which supports krill, whales, tuna and our fisheries. They also play a vital role in removing carbon dioxide from the atmosphere, which could break down.”

More alarmingly, recent experiments along Australia’s Great Barrier Reef show that red calcareous algae—the glue that binds reefs together in turbulent waters—actually begin to dissolve at higher CO2 levels. “The risk is that this may begin to erode the Great Barrier Reef at a grand scale,” says Hoegh-Guldberg.

So exactly where are our leaders, those slackers? What the hell is more important to attend to than this?

Julia Whitty is Mother Jones’ environmental correspondent. You can read from her new book, The Fragile Edge, and other writings, here.