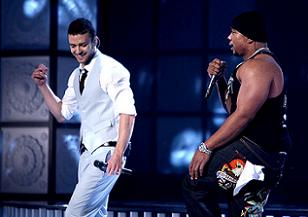 MTV’s Video Music Awards show tonight was, of course, pretty silly. The Las Vegas hotel venue made the event seem more like a corporate convention than a musical event, and the “performances,” such as they were, didn’t even try to appear live, with many singers forgoing even a fake headset microphone. Britney Spears, as the New York Times said, was “awful”:

Visibly nervous, she tottered around the stage, dancing tentatively and doing nothing that sounded or looked like real live singing. It’s too bad, because the song itself, “Gimme More,” is a pleasant surprise: brash and sleek and unapologetic.

And there, the Times finds the point—there was something to enjoy, and perhaps even to love, about this year’s VMAs: the music. Fans of progressive electronic sounds and mashuppy remix action must feel disoriented, since all of a sudden, popular music is aimed right at them. Yes, Britney Spears is an embarrassment to humankind, but production-wise, her new song, “Gimme More,” is a fascinating, groovy concoction of Timbaland-style dance beats and acid-house bleeps, with what seems like a glance back at my first favorite song ever, Hot Butter’s “Popcorn.” There’s not much of a song there, but the sounds themselves are fantastic, something that was a theme throughout the night. The multi-song “tribute” medley to Timbaland himself (pictured above) proved the producer’s sonic brilliance, with his hits mixing into each other like a fast-paced DJ set, although he should probably lay off the ‘roids. Between songs, producer of the moment Mark Ronson and a small band performed funky remixes of hit songs by Coldplay, Amy Winehouse, and the Smiths; and of course Kanye West’s “Stronger” uses a sample of Daft Punk’s “Harder, Better, Faster, Stronger,” although it might have been nice to seem him perform the track in front of an audience instead of squeezed into a hotel suite. Alicia Keys mashed up Stevie Wonder and George Michael, and while 18-year-old Chris Brown’s performance was all about copycat Michael Jackson dance moves, the brief interjection of the still-awe-inspiring bassline from Jackson’s own “Billie Jean” was pumped up by extra vocals, completing the sense that just about everything we were hearing was being remixed in one way or another. While French duo Justice were nowhere to be found, their music was all over the show, with crunchy techno tracks from their new album covering transitions and walk-ons. On the rock side, there was less to love, except the Foo Fighters and Serge Tankian of System of a Down covering “Holiday In Cambodia,” which MTV showed for about 10 seconds.

Bloggers are saying “Worst VMAs ever,” and yes, from a showmanship or entertainment perspective, it was a terrible, sad wreck of a show. Behind the scenes, apparently Kid Rock hit Tommy Lee, and Kanye threw a tantrum over not winning again. Whatever. For those of us who are fans of sound for sound’s sake, hearing so many current hits all in one place was oddly inspiring: American popular music may be stranger, engaged in more cross-pollination, and, well, Kraftwerkier than ever. During an acceptance speech, Justin Timberlake dared to bite the hand that feeds with an exhortation to MTV to “play more videos”; if his contemporaries keep making such interesting noise, it’s hard not to agree.