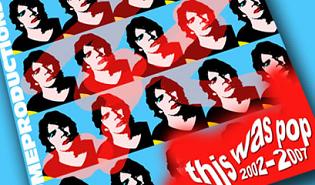 The Metallica of bootleggers, otherwise known as Mark Vidler, has posted basically every single thing he’s ever made in a series of grouped “online compilations,” over at his website. This is the guy who made the legendary Blondie-meets-The Doors combo “Rapture Riders,” as well as like 90% of the top 100 best mashups ever made. Full disclosure: I’m a bit player in the, er, “mashup scene,” or whatever, and we’ve had Mr. Productions over to DJ at our mashup club and stuff, but I promise my adoration is by no means logrolling—his astounding work stands on its own.

When you head over to his website, there’s a couple options: first up, for those unfamiliar with Go Home, there’s a link to grab a compilation he’s calling This Was Pop (2002-2007), featuring 20 of his most appreciated and influential tracks. “Girl Wants (To Say Goodbye To) Rock & Roll,” marrying Christina Aguilera to Velvet Underground, is a highlight: Vidler’s work always makes the originals sound tangential, like the new mix is how the music was always supposed to be.

For completists, grab one or more of twelve (!) grouped collections of his work, featuring, in total, hundreds of bootlegs, remixes, and random tracks. It’s all free, but the links are all to file-sharing sites like RapidShare, and demand is high; you might have to keep trying, but I assure you it’s worth it.

Vidler is one of the few mashup artists to score legitimate, artist-approved releases, putting out the album Mashed this year, which featured both his and other producers’ work. But as he seemed to acknowledge in an e-mail message to fans, the time it took for the album to wind its way through the approval process seemed to take its toll, and its release was greeted with little fanfare. The lack of appreciation (or financial reward) for even the brightest mashup artists seems to be taking its toll as well, as many (including Vidler) are making announcements of “leaving the scene;” French superstar DJ Zebra (again, full disclosure: I’m DJing some dates with him in France later this year) is moving on, and Australian Team9 (my partner in Dean Gray) has also made noises about “retiring” from bootlegs in 2008. What’s up, mashups? It’s easy to call the phenomenon “dead,” but then I hear something new from some random guy in Stockholm and I think, “there’s life left in this musical phenomenon yet.” What do you think, oh Riffers: have reports of mashuppery’s demise been greatly exaggerated, or should we go back to enjoying one song at a time like respectable music fans?