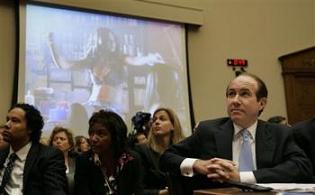 Rappers and music executives gave testimony today at the House Energy and Commerce subcommittee hearing on “stereotypes and degrading images” in hip-hop music. Attendees were treated to a guilt-wracked Master P (“I just made the music that I feel, not realizing I’m affecting kids for tomorrow”) and a mildly irritated David Banner (“If… hip-hop was silenced, the issues would still be present”), along with slimy CEOs, none of whom seem to have ever seen Martin Short’s old Nathan Thrum sketches. Mostly, though, the hearings were about Rep. Bobby Rush (D-Ill.), who managed to corral all the execs to his little show, proving that despite his liberal credentials (a former Black Panther!) he can exploit fear of art with the best of the conservatives, tossing in some accusations of damaging the black community for added liberal guilt. We’ve covered this here before, so let’s let Patrick Goldstein in the LA Times point out the trouble with all this:

If I could print a batch of current hip-hop lyrics — which I can’t, because my newspaper has its own standards about offensive language — most of us could probably agree that much of the language is abhorrent. But it isn’t so easy to find a consensus about the next step — what to do about it? It’s one thing to nod your head in agreement when a silver-tongued talk-show host advocates getting rid of all that insulting language until you start to wonder: Who’s in charge of defining what’s degrading and how far are they going to take it?

Bingo. Well, since nothing ever comes of these types of hearings but some temporary anxiety, you can at least appreciate them for the entertainment value, and in that regard, “Imus to Industry” doesn’t hold a candle to the PMRC hearings. It was 22 years ago last week when the videos for “Hot for Teacher” and “We’re Not Gonna Take It” were shown in our government’s hallowed chambers, and Frank Zappa put on a suit to come and rip the committee a new one, saying:

The PMRC proposal is an ill-conceived piece of nonsense which fails to deliver any real benefits to children, infringes the civil liberties of people who are not children, and promises to keep the courts busy for years dealing with the interpretational and enforcemental problems inherent in the proposal’s design.

Even the late, great John Denver surprised committee members by siding with the metalheads, saying censors often misinterpret music (like his “Rocky Mountain High”) and that censorship backfires:

Of course, the House Un-American Activities Committee, now that was good times. Kids these days just don’t know how to throw a hearing.